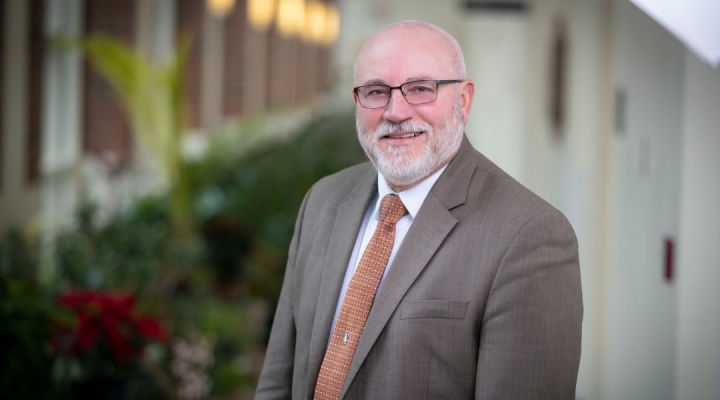 Richard Coffey is the new department head for the Oklahoma State University Department of Animal and Food Sciences. Coffey is a two-time graduate of OSU with a background in swine nutrition and management. (Photo by Todd Johnson, OSU Agricultural Communications Services)

STILLWATER, Okla. — Richard Coffey has been selected as the new head of the Oklahoma State University Department of Animal and Food Sciences within OSU Agriculture. The Oklahoma A&M Board of Regents approved the action at its meeting on March 25. He is expected to begin his role on July 1.

Coffey most recently served as chair of the Department of Animal and Food Sciences in the College of Agriculture, Food and Environment at the University of Kentucky. A native Oklahoman who grew up in Jones, Coffey earned a bachelor’s degree in animal science and a master’s in swine nutrition from OSU before completing a doctorate at UK in swine nutrition with a minor in biochemistry in 1994.

As an Extension professor at UK, he was instrumental in working directly with producers to design and manage swine facilities, address environmental issues related to operations and provide nutrient management plans. Coffey’s 17 years of experience at one of UK’s experiment stations, including two years as its director, opened the door to his administrative career, ultimately preparing him for his new role at OSU.

Thomas G. Coon, vice president and dean of OSU Agriculture, said Coffey’s vision for OSU animal and food sciences aligns with the division’s strategy to advance every area of the land-grant mission.

“We want to build on the reputation and success of our undergraduate experience while recruiting students from all over the country; increase, expand and strengthen our research programs through collaboration; and ensure our Extension programs are as relevant today as they were 30 years ago by connecting with people through online content,” Coon said.

“OSU Agriculture is such a big driver for the university, and the department’s organized and active alumni association is a huge benefit,” Coffey said, adding the proximity of OSU farm units on campus is critical to undergraduate student involvement and research, and the success of OSU’s judging programs is a great calling card as well.

OSU alumnus Randy Renbarger, who worked at the swine barn alongside Coffey when they were undergraduates, said Coffey has always demonstrated the potential to be a leader in the animal science industry.

“The purebred centers are important to me because they provided hands-on experience with the financial help that I needed when I was going to school,” Renbarger said. “He was always very focused and trustworthy. I’m proud of him and glad that OSU was able to hire someone like Richard.”

In addition to the swine facility, OSU’s beef barn has served as a launching pad for some of today’s most brilliant and successful beef scientists and ranchers.

“Our beef research and Extension is pivotal because it’s an important part of Oklahoma’s agricultural industry,” Coon said. “Beef research is certainly tied to our livestock judging program and reflects our department’s commitment to students and learning by experience.”

The Ferguson College of Agriculture’s close relationship with the OSU College of Veterinary Medicine also attracts students nationwide to OSU’s animal and food sciences program. Many students who apply to vet school at OSU or other prestigious programs around the country begin their academic journey with an animal and food sciences undergraduate degree from OSU. With support from the office of OSU President Kayse Shrum, Coon and OSU Agriculture are equipped with additional resources to help continue the department’s history of excellence.

“We’re going to fill some positions in the next couple years that will determine what the department looks like long term,” Coffey said. “I’m a firm believer that at a land-grant university, a department needs to be strong in all three of its missions. Our alumni base can provide important input on where we want to go, how we teach and how we fill gaps in our Extension and research programming.”

Coffey is also known nationally for his service on the board of directors for the American Society of Animal Science, and he was named an administrative fellow with the organization in 2018. He received the Advanced Degree Graduate of Distinction award from the OSU Department of Animal and Food Sciences in 2019 and was named a member of the Kentucky Pork Producers Association Hall of Fame in 2015.

Coon said he is confident in Coffey’s abilities to represent the department as a supportive alumnus and knowledgeable animal science specialist while providing the kind of modern leadership that will carry the program into another competitive era.

“I want to make sure the department is positioned for whatever lies ahead in the next 20 to 30 years,” Coffey said. “It’s just a great place to be.”

Master Gardener tips for the Panhandle