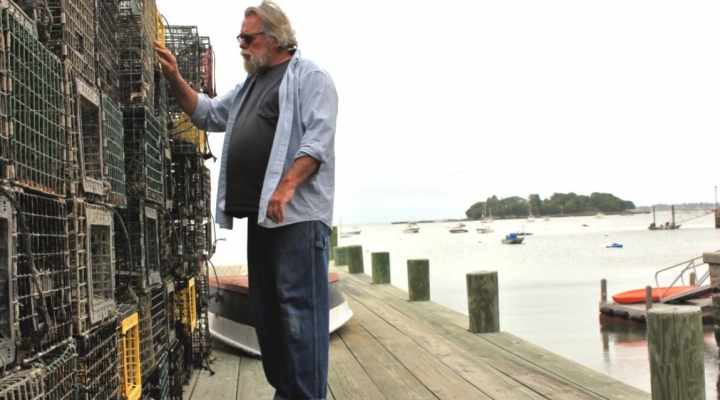 Jonathan Waters checks a stack of lobster traps he is converting for use in oyster production under a new state initiative around the Thimble Islands. He will raise and harvest shellfish on five acres of grounds off one of the islands, Rogers Island, seen at rear of photo. (Steve Jensen/CT Dept. of Agriculture)

BRANFORD, Conn. — Eight small-scale shellfish operations have been granted licenses to work the historically rich oyster and clam beds around the Thimble Islands in Long Island Sound under a Dept. of Agriculture initiative designed to spark a renaissance of the once-thriving industry in the area.

The Department acquired the shellfishing rights to about 900 acres of the beds from a private owner in 2014.

The project is aimed at encouraging new commercial aquaculture enterprises around the Thimbles, a cluster of dozens of small granite islands off the village of Stony Creek, and developing a market for its oyster, clam and kelp producers.

“The potential is huge on so many levels,” said Stony Creek native and shellfisherman Jonathan Waters, who received one of the licenses this week for his Thimble Island Shellfish company. “The market for oysters is very good and demand is up for Connecticut oysters everywhere.”

Waters said Connecticut oysters fetch as much as $2 each retail, and are now sold as far away as Texas.

Waters said the new program, called the Connecticut Sustainable Aquaculture Initiative, is generating economic activity in the area now as the newly-licensed operations gear up to begin harvesting next year.

“It’s already working,” Waters said. “People are making investments in boats and equipment and this is progressing quite quickly.”

Waters will plant and harvest shellfish on five acres of grounds off Rogers Island, about a half-mile south of his dock, as well as cultivate them in submerged wire cages.

With the dramatic drop-off in lobstering in the Sound in recent years, Waters is converting dozens of surplus lobster traps into oyster cages.

Agriculture Commissioner Steven K. Reviczky said more licenses are expected to be issued once the initial participants are established. The goal is to increase production of shellfish through smaller-scale hatchery and cage-culture techniques in near-shore, protected waters and on lots no larger than five acres.

Those types of operations now comprise only a small fraction of the industry, which consists mainly of larger companies that cultivate oysters and hard clams on the bottom of expansive leased beds further offshore and in deeper waters.

That business model requires significant investment for deep-water boats, equipment and lease fees for beds owned by the state and administered by the Dept. of Agriculture.

“This program represents a unique opportunity to grow the shellfish industry in Connecticut by fostering small, entrepreneurial operations that will supply fresh, high-quality shellfish to the surrounding shoreline and beyond,” Reviczky said. “Acquiring these grounds was a critical step in opening this robust market to a much wider and more diverse audience.”

Shellfishing has been a cornerstone of the local culture and economy since the 1700s, but commercial harvesting has been largely dormant in the last decade or so.

The shellfishing rights to the 900 acres around the Thimbles were obtained with the use of farmland-preservation funding in 2014 from Ed Lang, a retired part-time shellfisherman who had purchased them in the 1980s.

Waters, who harvested for Lang for many years, said the new license will allow him to get back into an industry that can be very competitive and cost-prohibitive for smaller operations looking to start up.

He is now converting the hull of a 30-foot tugboat that he found in a barn in Maryland into his main oystering boat.

Plans are to also use the boat to mentor less experienced shellfisherman in best practices and techniques – another goal of the program.

He recently gave a tour of the nearby waters and his operation to a University of Rhode Island marine-studies student who is interested in taking out a shellfishing license.

“I think this industry is very important to this area and I want to see it continue for many generations,” Waters said while working on a rail of the boat. “This program has created an opportunity for me to get back into it and to help others get started, and it’s a very moving thing for me to have this happen here.”

Those interested in being considered for the program may contact David Carey, Director of the Bureau of Aquaculture, atDavid.Carey@ct.gov