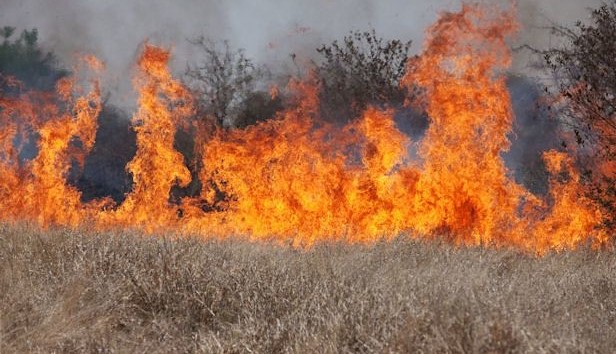 Giant rangeland wildfires in recent decades have destroyed vast areas of sagebrush steppe that support some 350 species of wildlife. Experts say the blazes have mainly been driven by cheatgrass, an invasive species that relies on fire to spread to new areas while killing native plants, including sagebrush. (U.S. Fish and Wildlife Service Headquarters, Flickr/Creative Commons)

BOISE, Idaho (AP) — Federal officials have released their review on removing or changing vegetation over a huge swath of the U.S. West to stop wildfires on land used for cattle ranching, recreation and habitat for imperiled sage grouse.

The work would occur on strips of land up to 165 yards (150 meters) wide and up to 11,000 miles (18,000 kilometers) long in Idaho, Washington, Oregon, California, Nevada and Utah, according to an environmental analysis released Friday. It didn’t give specific details on what the impact to the land could be.

The U.S. Bureau of Land Management announced in 2017 it planned the review into creating so-called fuel breaks that starve fires of vegetation that can burn in the Great Basin.

“We know that wildfire is the greatest threat to the sagebrush steppe ecosystem and we’re very interested in increasing fire resiliency in these landscapes, and this is one tool to do that,” agency spokesman Ken Frederick said.

Giant rangeland wildfires in recent decades have destroyed vast areas of sagebrush steppe that support some 350 species of wildlife. Experts say the blazes have mainly been driven by cheatgrass, an invasive species that relies on fire to spread to new areas while killing native plants, including sagebrush.

Once cheatgrass takes over, the land is of little value.

Frederick said there’s no cost estimate for the work because it’s not clear what types of fuel breaks field managers might choose for different areas. They could either remove vegetation or reseed the land.

Fuel breaks can cost from $12,000 to $44,000 a mile. Methods to create them include putting down herbicide, mechanically removing vegetation and planting vegetation that can resist wildfires.

The fuel breaks would total about 1,700 square miles (4,400 square kilometers) and help protect a 350,000-square-mile (900,000-square-kilometer) area by slowing rangeland wildfires, allowing firefighters to more easily put them out.

“We’re confident that the fuel breaks are going to slow fire down and also create a linear feature so that fire crews can fight the fire safely,” Frederick said.

But critics say fuel breaks can fragment habitat and harm wildlife, including sage grouse, and in many cases aren’t effective.

Erik Molvar of Western Watersheds Project noted that rangeland wildfires have jumped interstates and the Columbia River. Instead of fuel breaks, he said, federal agencies should be trying to eradicate cheatgrass and other invasive plants.

“That is a very difficult and challenging task,” he said. “But if you took all of the money and effort and time that the federal government appears ready to throw at this fuel break boondoggle, we might make some real progress.”

Public comments on the environmental review are being taken until early August.

The federal land managers also are working on another environmental impact statement on fuel reduction and restoration in the Great Basin. Frederick said a draft of that plan should be available in about three months.

CDFA announces vacancies on fertilizer board

American Hereford Association: PACE is back