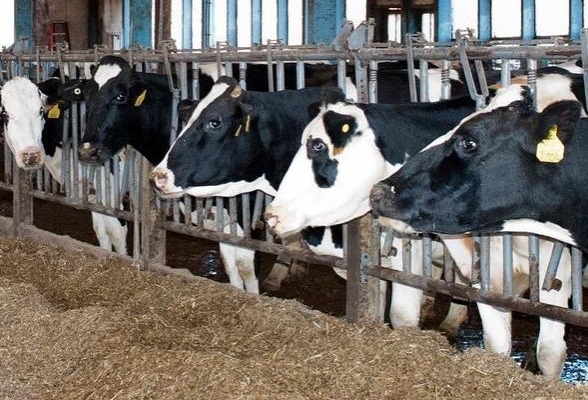 In the Center for Dairy Excellence’s latest episode of the “Cow-Side Conversations” podcast, Frank Graybill, a retired dairy producer from Restful Acres Dairy Farm in Dauphin County, Pennsylvania, reflected on his rewarding 47-year career as a dairy farmer and his family’s decision to transition out of dairy in July. He also shared lessons he learned about farm safety throughout his career and ways he stays positive and energized about the future. (file photo)

HARRISBURG, Pa. — In the Center for Dairy Excellence’s latest episode of the “Cow-Side Conversations” podcast, Frank Graybill, a retired dairy producer from Restful Acres Dairy Farm in Dauphin County, Pennsylvania, reflected on his rewarding 47-year career as a dairy farmer and his family’s decision to transition out of dairy in July. He also shared lessons he learned about farm safety throughout his career and ways he stays positive and energized about the future.

Frank opened the podcast by describing how Restful Acres had grown over the years. When Frank and his wife purchased the farm from his parents more than 40 years ago, there were 37 cows and 91 acres. Over the years, they grew the operation to 180 cows and 160 acres that they double cropped. Frank and his wife had full ownership over the dairy as well as one full-time employee and a few part-time workers. While they still have a small beef herd, Frank says the decision to sell the cows and retire from dairy farming in July of 2022 felt like good timing based on dairy market conditions.

“When I was younger, I rode bicycles. I always liked to rest at the top of the hill, not the bottom. I wanted to do that as I exited dairy,” he shared in the podcast. “I knew milk price was good and the price of cows was good, too, so it was a goldmine to do that. I feel we’ve accomplished that with no regrets.”

Even though he exited the dairy industry on a positive note, Frank shares how the transition process was a complex one with different emotions for his family. The Graybills began the process with a potential buyer for Restful Acres: a young couple who wanted to get started in dairy farming. The Graybills were searching for a new property to raise their beef cattle and were developing a transition plan for the young couple to buy the cattle and equipment.

“Our children and grandchildren were involved in the conversations, but when it really came down to it and we told them [we were thinking of re-locating], it brought tears,” Frank shared. “We re-considered and decided we were going to stay right here. We already have the farm, why would we move to another one? A farm is more than just a place to make a living. It’s a place to live. A person does become attached to it, there’s no doubt about it.”

After making the decision to stay on their home farm, Frank and his wife eventually sold the cows to another farmer. They currently have their beef herd on the operation, but with their neighbors and dairy community in mind, they chose to keep the free-stall barn and milking parlor intact.

“We had a barn fire a number of years ago, and we also had a silo collapse. So I know how those tragedies can be when someone’s barn burns,” Frank explained. “We’ve had people who have really blessed us, so I wanted to keep our facilities available and intact. If someone has [something like that happen], then they have a quick place to move their animals and we can help them out just as we’ve been blessed before.”

As he reflects on the transition process throughout the podcast interview, Frank shared several key lessons both parties learned as they worked with transition consultants and developed their financial plans.

“I don’t think there is anything I would have done differently. However, it was difficult to go back and tell the young couple we weren’t going to go through with it. But I think they learned tremendously through it,” Frank said. “While they were very sharp financially and business wise, I think it helped them refine their financial information and evaluate what was important. I think we both learned along the way and we’re still friends. I respect and appreciate them very much. There are no hard feelings. They are going to keep moving forward.”

Frank says he also learned the importance of encouraging younger farmers and keeping everyone satisfied and motivated throughout the transition process.

“If you have someone of high caliber who wants to keep moving [through the transition process], you have to keep them satisfied. That young person wants to acquire cattle, they want to get equipment, and they want ownership of a farm. That’s a dream of the American farmer to have their own farm,” he added. “Somebody can’t wait until they’re 45 to start doing that. As an owner, if you want someone, you need to be encouraging them and keep moving along with them.”

During the podcast interview, Frank reflected on several lessons he learned about farm safety throughout his career after a silo collapsed on his operation, hazardous gasses were emitted when cleaning out a heifer barn, and more. He offered his suggestions for being intentional with farm safety:

Frank concluded the podcast by sharing how he and his wife are enjoying life after dairying, including travel and time with family and friends.

“I enjoyed our 47 years on the farm, and I enjoyed dairy farming right up until the last moment. But life brings changes and we’re enjoying the change. I just turned 70, we have good health, and we have things we still want to do. We milked three times a day. It was a busy schedule,” Frank shared. “We’ve been very busy since the cows left. We do have a property that we’ve spent a number of days at, and we’ve been with a friend out to the Midwest. We have been gone many days, so I think once we’re here at the farm day after day, it may hit us harder.”

Even though he no longer milks cows, Frank continues to be optimistic and energized about the future of the dairy industry – an attitude he says he gained by interacting with other forward-thinking producers, serving on church and dairy industry boards, and making time for his personal hobbies.

“As a farmer, we always think next year is going to be better. You plant that corn, and you think you’re going to get a great yield and the cows are going to milk better. That’s just inbred in a farmer, and I hope I never lose that in myself. That’s an optimism that helps carry us through life, and I think it’s a great attitude to have,” Frank said. “There are loads of people who need to eat. There is great potential out there yet. We’ll always need a good dairy farmer.”

To listen to the full podcast interview, visit www.centerfordairyexcellence.org/podcast. The podcast is also available on Spotify, Apple Podcasts, and Amazon Music. With a new episode released each month, Frank’s interview is the 11th episode in the second season. The podcast was designed to share real-time farmer insight, tricks of the trade, and inspiring stories from dairies across Pennsylvania.

Take a Walk in Penn’s Woods