Home / Michigan / ReTain may increase fruit set of SweeTango apples
A new user experience is coming! We'll be asking you to login to your Morning Ag Clips account March 1st to access these new features.
We can't wait to share them with you! Read more here. 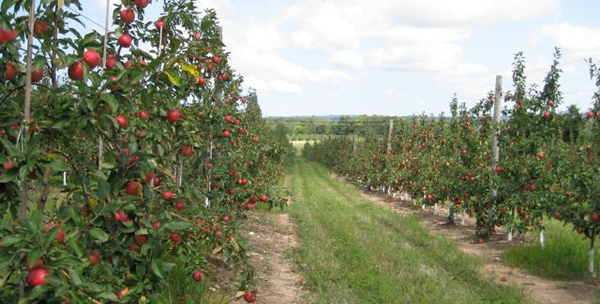 Plant growth regulator could be used at key timing to increase yield in shy-bearing SweeTango orchards, and has implications for other shy-bearing varieties in Michigan’s industry. (Rennhack Orchards)

EAST LANSING, Mich. — ReTain is a plant growth regulator product manufactured by Valent Crop Sciences Company that is used by tree fruit growers to reduce fruit drop, delay harvest, improve fruit firmness and prolong longevity of flowers. ReTain works by inhibiting the biosynthesis of ethylene, delaying ripening and senescence. The product is widely used by Michigan’s apple industry in the final weeks prior to harvest to delay maturity in orchards, increase color, improve fruit finish and stagger the harvest of prominent varieties. It is also helpful in extending the shelf life of apples.

Apple growers typically spend more time worrying about removing enough fruit from orchards through thinning than they do worrying about having enough fruit set. However, there are several commercial varieties that can be prone to poor fruit set, leading to an increased interest in recent years in using ReTain to shut down the biosynthesis of ethylene in the bloom and post-bloom window to improve fruit retention in these varieties. The process of anthesis (blooming) produces considerable amounts of ethylene. Ethylene ages the flowers, shortening available time to achieve pollination, fertilization and ultimately fruit set.

Research of Polianna Francescatta, Valent Crop Sciences, has demonstrated that SweeTango, a popular club apple variety, produces a peak of ethylene several days after bloom. This variety can sometimes be prone to shy-bearing, leading to interest from commercial growers in using ReTain to shut down the peak of ethylene with the goal of improving the retention of fruit. A field trial conducted in 2019 in west central Michigan demonstrates the promise of this practice for growers of this variety, as well as other shy-bearing varieties in Michigan.

A commercial SweeTango orchard with a history of poor fruit set in Oceana County, Michigan, was selected for the work. Trees were established in 2007 on M26 rootstock and trained as a high-density fruiting wall. Trees within the orchard were determined to be uniform in size and strength of bloom prior to the trial. Four separate reps of 115 trees within the orchard were treated with a half pouch per acre rate of ReTain at king bloom petal fall. The remainder of the orchard was left untreated with ReTain.

The total number of fruits per tree on 40 trees in two separate ReTain-treated reps and 40 trees within two separate reps of the untreated control were counted in late July 2019, after June drop had ended. Average number of fruit set per tree was calculated for both the ReTain and control treatment reps, and a one-way ANOVA and pairwise tests were conducted across the means of each treatment rep to determine any significant differences between treatments or between reps of the same treatment (p<0.05).

This work shows promise for future usage of ReTain in Michigan SweeTango orchards, as well as orchards of other shy-bearing varieties. We recorded over 20% more fruit set in both reps treated with half pouch of ReTain at king bloom petal fall compared to both reps that were untreated with ReTain. If growers can consistently experience the kind of increase in fruit set that we measured in this trial, this practice would a sound financial investment by any Michigan farmer growing SweeTango apples that are shy-bearing. Other varieties that tend to be shy-bearing could also potentially benefit from ReTain applied at king bloom petal fall, including Golden Supreme.

Additionally, some blocks/varieties have a tendency to have poor fruit set on the bottom of the tree but not the top. ReTain is locally systemic, and thus any specific areas of a tree that are sprayed will respond, while untreated areas will not. This could provide utility for growers who struggle to achieve even fruit set within the canopy of an orchard.

Pinpointing the timing for biosynthesis of ethylene in any shy-bearing variety will be important if ReTain is to be utilized effectively to improve yield. SweeTango produces a strong push of ethylene several days after bloom, but it is likely that the timing for this ethylene production differs in other varieties. As a result, it is possible that while an application of ReTain could improve fruit set in a shy-bearing variety like Golden Supreme, the application may not be optimally timed for king bloom petal fall. Further work in pinpointing biosynthesis of ethylene in apple varieties both during and after bloom will help shed further light on this subject and improve understanding for optimal usage of ReTain to improve fruit set.