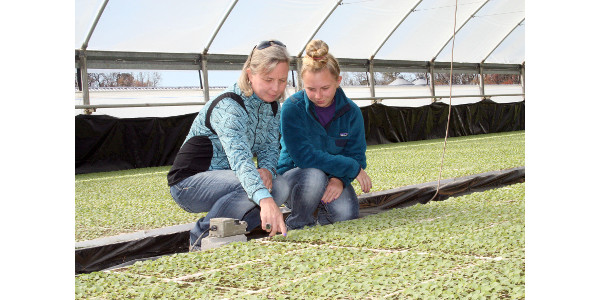 Mary Beth and Anna Jackson of White Hill Farm play an integral role in the success and sustainability of their family's operation. (Courtesy of N.C. Cooperative Extension)

SANFORD, N.C. — Mary Beth Jackson grew up on a tobacco farm and swore she’d never marry a farmer. Her daughter, Anna, had no particular interest in farming as a career; she thought dental hygiene or bookkeeping might be a better fit.

Sometimes, things don’t turn out quite like you expected.

Duane understands the obstacles women face in agriculture and appreciates what a huge contribution Mary Beth and Anna make to the farm, whether it’s working in the chicken houses, managing technology (Anna’s specialty) or handling the steady stream of crises that keep popping up in a business that rarely slows down.

So, what would happen if the women were no longer involved in the farm?

Together, Mary Beth and Anna are reshaping the agricultural landscape by finding new ways to sustain the family farm, even at a time when it’s getting harder for many to survive.

For the Jacksons, one key has been taking chances and trying new things. Sometimes, the results are gold. Other times, not so much. When things don’t go as expected, they learn what they can and move on.

“Just because it’s always worked this way doesn’t mean we always have to do it that way,” says Mary Beth. “We can try something new.”

Anna says there are a lot of misconceptions about what happens on a farm, probably because few “city people,” as she calls them, have had the chance to spend time growing their own food.

White Hill Farm is helping people learn about food safety — things like how pesticides affect crops and how all of the animals are treated with care. That’s not something most farmers used to worry much about.

“Farmers a long time ago did what they did; they just did their business and took care of themselves,” says Mary Beth. “Now, there’s a much larger responsibility to the public — educating them and giving them the information they need.”

Despite their significant contribution and changing cultural norms, it’s still not clear sailing for women who are planted in modern agribusiness. Both Anna and Mary Beth admit that they’re often underestimated by some who assume they can’t handle the business complexities or physical work required on a diversified farm that produces poultry, tobacco and strawberries.

But as you might expect from women who rise to the challenge, that kind of doubt doesn’t faze them at all. “I’m a very strong-willed person,” says Anna. “So if somebody tells me something that I don’t like or talks down to me, I’ll quickly tell them I know what I’m doing.”

Even with the risk and obstacles, Mary Beth and Anna wouldn’t give up the family farm. They embrace the strong relationships forged by sharing so much time together. Not only with the immediate family, but also with seasonal workers who return year after year.

“The small-family love that we share,” Anna says. “That’s what keeps me going.”

Ventilation system to be featured at Expo

Soldiers in the field

Boots in the Barn to be offered in Emmetsburg
January 6, 2021

Virtual Boots in the Barn for dairy women
December 9, 2020