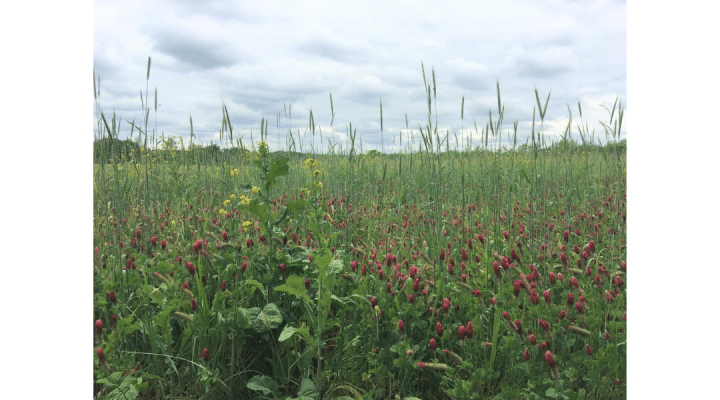 A cover crop mixture grows in an ungrazed control plot on the study site in Alabama. The team started the experiment in October 2018 beginning with planting the cover crops. The grazing began and then the first cash crop of the experiment was planted in the spring. The cash crop was harvested in mid-October. (Credit: Leanne Dillard)

MADISON, Wis. — Winter grazing is part of what is called an integrated crop-livestock system. It is a process where livestock, such as cattle or goats, are allowed to graze a crop field during the winter. It is more common in climates with mild winters. Rather than eating the cash crop the farmer sells, the livestock eat the cover crop that was planted to grow over the winter.

Winter grazing is a useful option for farmers who also raise livestock. They can feed them using cover crops they were going to plant anyway, a cost-efficient and sustainable practice. But how does winter grazing impact the soil underneath? Hayley Crowell, researcher at Auburn University, and her team worked to find out.

“Finding the best management practices to improve soil health and maximize economic gains can improve the livelihoods of producers in the Southeast and all over the world,” she explains. “This is possible by using cropland year-round and potentially improving crop productivity through increased soil health.”

This study was published in Agrosystems, Geosciences & Environment Journal, a publication of the American Society of Agronomy, and Crop Science Society of America.

They performed a study for two years on a site in Alabama. The team started the experiment in October 2018 beginning with planting the cover crops. The grazing began and then the first cash crop of the experiment was planted in the spring. The cash crop was harvested in mid-October. Next, the cover crops were planted shortly after harvest.

In mid-January after the cover crop was well-established, they allowed livestock to graze the fields until it was time to plant more cash crops in the spring and repeat the process. In their experiment, they let cattle graze the fields for different lengths of time and studied the soil carefully. “Soil chemical properties are very important to understanding and evaluating soil health,” Crowell says. “Various soil chemical indicators are related to basic soil functions. These include promoting microbial activity, controlling water flow, nutrient cycling, and physical stability.”

They tested for soil organic carbon and active carbon to check for impacts on soil organic matter, which is viewed by most as very important for soil health. The team also analyzed what is called water stable aggregates and penetration resistance. These are qualities of soil that impact how it takes in water and how well plants grow in it. Lastly, they studied the microbes in the soil, many of which are beneficial to plants.

“Our data points to how farmers can use this style of management without seeing a big change in soil health in the first two years,” Crowell says. “The study was only based on data from two years. So, it’s not too surprising that our data didn’t point to significant changes in soil health between the different grazing treatments. With more time, we will hopefully be able to paint a clearer picture of how the length of winter grazing impacts soil health.”

Crowell stresses that this is part of a long-term study, and will require further research collecting more data on the impacts of winter grazing on soil. It is possible cattle hooves stepping on the soil will compact it, or that their manure will provide benefits to the soil. These are just a couple of possibilities that will be examined in future work.

“There is limited research on integrated crop-livestock systems that are designed to promote soil health,” she says. “While some producers are already incorporating winter grazing into their cropping system, they are not necessarily managing it in a way to improve soil health. This is what our study aimed to investigate.”

Funding for this research was provided by the Alabama Natural Resources Conservation Service.