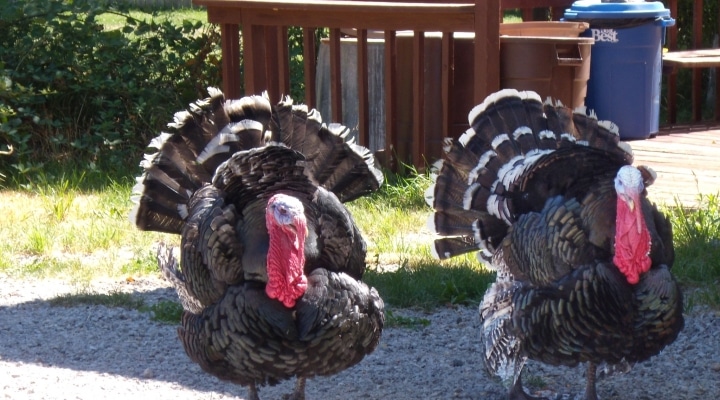 A Penn State research team has received a $500,000 grant from the U.S. Department of Agriculture’s National Institute of Food and Agriculture to develop novel strategies to overcome the constraints that the seasonal cycle imposes on reproductive output of turkey hens. (photo by ihave3kids, creative commons/flickr.com)

UNIVERSITY PARK, Pa. — A Penn State research team has received a $500,000 grant from the U.S. Department of Agriculture’s National Institute of Food and Agriculture to develop novel strategies to overcome the constraints that the seasonal cycle imposes on reproductive output of turkey hens.

Turkeys, like most animals, are seasonal breeders, noted lead researcher Paul Bartell, associate professor of avian biology, College of Agricultural Sciences. To coordinate their reproductive output to occur when the environment is most hospitable, they have evolved neurobiological mechanisms for measuring daylength and then for converting that information to effectively modulate their reproductive activities.

“In agricultural systems such as turkey production, this daylength-timing mechanism regulating reproduction can impede animal production because this mechanism provides only a seasonal window when an animal is able to reproduce,” he said. “In this research, we seek to identify the mechanisms in the brain of turkey hens underlying photoperiodism, so that we can develop methods for overcoming the constraints that the seasonal cycle puts on their reproductive output.”

Reproduction in turkeys is initiated by increased daylength and becomes limited by the onset of “broodiness,” eventually resulting in the termination of egg laying. Hens lose their sensitivity to the reproductively stimulating effects of long days, even under ever-increasing daylengths. Loss of productivity is costly, as birds must be cared for until coming back into production.

In the study, which will be conducted primarily at the Penn State Poultry Education and Research Center and at the Huck Institutes of the Life Sciences, researchers will compare these brain areas prior to photoperiodic activation, during egg laying and during broodiness to understand how the brains of turkey hens change to regulate the reproductive cycle. Their findings will permit the development of strategies for alleviating production inefficiency due to the limited lay period resulting from photoperiodic insensitivity.

“We will use immunohistological, autoradiography and MRI techniques to identify the brain areas responsible for light sensing and the neuronal pathways that are activated during photostimulation to carry photic information to the pituitary,” he said. “We also will employ electrophysiological techniques to understand the type of neuronal signals produced and the neurons involved in their production to provide a target for future modulation of reproductive activity.”

The study results could lead to significant economic impact. An average breeder hen lays for approximately 28 weeks and produces up to 130 eggs during that time span. In a typical commercial operation utilizing 25,000 breeder hens, postponing the end of egg laying by two and a half weeks to allow 10 additional eggs per hen — at a value of approximately $1 per fertile egg — would yield $250,000 in additional revenue per operation.

Also, this research has the potential to make a substantial contribution to animal scientists’ understanding of photoperiodism and seasonal regulation of reproduction, Bartell said, adding that the findings from these experiments could forge a new path of research.

“We believe they will allow us to create novel and innovative strategies for overcoming the constraints that the evolutionary vestiges of the seasonal cycle puts on reproductive output in the turkey hen.”