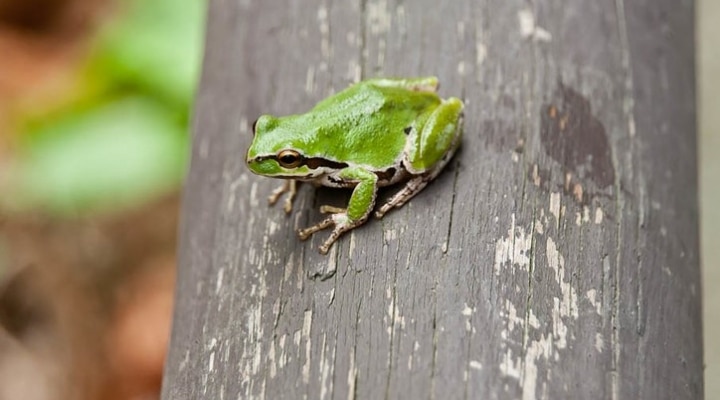 The researchers also sought to learn more about the Pacific frog biology to determine when they were the most active and potentially could move into fields. (Luke McGuff, Flickr/Creative Commons)

WOODLAND, Calif. — Food safety research is often about the contamination that an animal leaves after they have visited a produce field. This project focuses on animals that live in the environment and are small enough to be caught up in the harvesting of an area and end up in a fresh-cut product.

To help growers and processors minimize these incidents, researchers have found a lipped barrier made of aluminum siding can prevent Pacific tree frogs from moving into leafy green fields. Even silt fences, common in California’s Salinas Valley, can reduce frog movement by nearly half, said Michelle Green, Ph.D., University of South Florida in St. Petersburg and project lead.

“It’s important for growers to know that while any fence is better than no fence, we can offer ways to improve the fences they use,” she said.

Based on input from industry, the researchers learned that potential barriers had to be economical and withstand strong winds that typically come up in the afternoon in the Salinas Valley.

Daniel Hughes, Ph.D. and a postdoctoral researcher with the UIUC Department of Animal Sciences, initially conducted field trials akin to escape rooms. He put frogs in enclosures constructed of various materials to measure how many were able to climb over the top.

Based on the trial results, the researchers narrowed candidate materials down to aluminum siding with a 10-centimeter lip at the top, a sandpaper-covered fence and window screening. The silt fencing acted as the control.

Working with Salinas Valley cooperators, Hughes then erected the short-stature barriers around natural frog habitat near leafy green fields and monitored how many frogs climbed out.

Davidson said the two top barriers work in different ways. Pacific tree frogs use suction-cup-like toe pads and secrete a liquid to aid suction as they climb. The sandpaper’s rough texture reduces the efficacy of the frog’s suction system.

The aluminum barrier – and particularly the lip – creates an uncomfortable environment for frogs, which don’t like to be in the open, Green said. The frogs that did climb the aluminum barrier hid under the lip and never made it over the top.

The aluminum barrier also was effective on small mammals, lizards and other small trespassers, she said.

Part of the project looked at whether pre-recorded frog calls could be used to prompt frog movement. Although the results were promising, Green cautioned they were only from three sites.

“There was one male that would position itself right by the speakers,” she said. “They do respond to the vocals. There would be no calls but when the recorded calls started, it induced activity and that could potentially get the frogs to move. Then the question becomes, where do you want them to move to?”

The researchers also sought to learn more about the Pacific frog biology to determine when they were the most active and potentially could move into fields.

“The take-away is we saw activity at different times of the year than expected,” Green said. In February and March, for example, full-sized adults were ramping up to breed. This differs from a guide book that said Pacific tree frogs are most active in November and December.

“It helps to know when frogs are likely to be active and near their fields so growers can decide what type of fencing to use,” Green said. “They can put in fencing that will be permanent or they can do something that is temporary.”

The methods also may reduce frogs in the growing environment without negative impacts to wildlife in the area.

The researchers credit their Salinas Valley cooperators and the California Leafy Greens Research Program advisors for their project’s success.

“I don’t know if we could have done the study without the cooperators,” Davidson said. “They helped us find sites for the study. They gave Danny and our whole team access and provided people to help install the fences. They did more than we could have asked.”

The Center for Produce Safety (CPS) is a 501(c)(3), U.S. tax-exempt, charitable organization focused exclusively on providing the produce industry and government with open access to the actionable information needed to continually enhance the safety of produce.