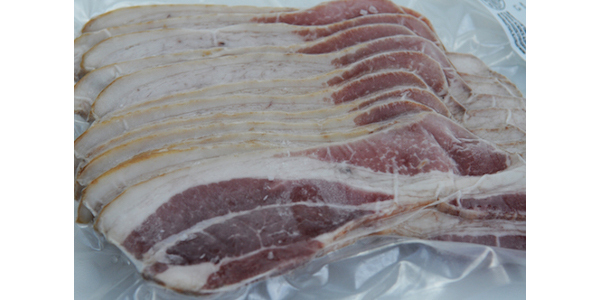 Researchers at Kansas State University have found that adding an antioxidant to bacon prior to shipping and freezing will help to extend its shelf life. (Courtesy of K-State Research and Extension)

MANHATTAN, Kan. — Kansas State University researchers are sweet on a recent study in which they found that naturally smoked sugar helps to extend the shelf life of frozen bacon.

They tested bacon that had been frozen for up to 120 days to find out whether adding an antioxidant – in this case, smoked sugar – could slow down the rate of oxidation, a natural process that leads to discoloring and an off-flavor to the meat.

The answer is clearly yes.

“There’s no doubt in my mind that if we’re going to have cured and cooked products that are frozen, such as ham or bacon or any of those types of products, we do need to have an antioxidant to help combat oxidation,” said K-State Research and Extension meat specialist Terry Houser.

Many consumers are familiar with meat that develops a grayish color and off-flavor when stored for too long in the freezer. This same thing happens to frozen bacon and other pork products after about 20-40 days, Houser said.

That’s a challenge for hotels, restaurants and other food service businesses, which often don’t receive bacon, in particular, until it’s already been packaged for 30-40 days.

“This also has implications for our small processors who freeze their bacon and sell it frozen,” Houser said. “It does not seem, unless we use a vacuum package, that we can get flavor shelf life much longer than 40 days on frozen bacon.”

But, he added, “when we added an antioxidant to these bacon formulations, it really extended our shelf life over the frozen storage period. In this case, we tested these products out to 120 days of frozen storage.”

Smoking meat – done by exposing it to smoke from burning sawdust, chips or other hardwood – has been known to help preserve many types of meat and give a certain flavor that is often sought by consumers.

What the smoking process does, says Houser, is deter the oxidation process, so the researchers looked to encourage that same process by using a commercially available smoked sugar and then adding it to bacon during the curing process.

K-State researchers injected smoked sugar into raw bellies during the curing process, packaged and froze them for a period of up to 120 days, and then used scientific methods and trained taste panels to verify the quality of the meat.

Houser added that one benefit of adding an antioxidant such as smoked sugar to the formulation is that it penetrates deeper than smoking the product itself.

“When we smoke the entire belly, we only get a surface treatment on those products,” he said. “So whenever we can add an ingredient into that particular product such as the belly, we can get a lot more uniformity in terms of our ingredient contact with most of the fats in that product.”

Ultimately, it means better bacon more of the time for consumers, Houser said.

“When the quality of our products is better, everyone wins, and we definitely want consumers to have good eating experiences so that they are going to come back and buy more of that product,” he said.

Houser said smoked sugar adds another flavor profile that he suspects also will be pleasing to consumers. He noted that many compounds can be used as antioxidants, but K-State’s study was specific to smoked sugar.