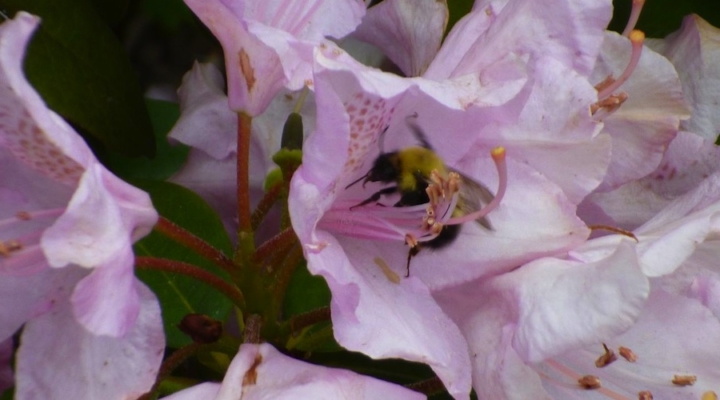 Ph.D. student Evan Palmer-Young and advisor evolutionary ecologist Lynn Adler had hoped an earlier finding of reduced parasite load with anabasine consumption was evidence that bees may use "nature's medicine cabinet" to rid themselves of it. But in the current issue of PLOS ONE they report that result was not repeated. (UMass Amherst)

AMHERST, Mass. — A new study of possible self-medicating behavior in bumble bees conducted by researchers at the University of Massachusetts Amherst reports that a once-promising finding was not supported by further experiments and analysis.

Doctoral candidate Evan Palmer-Young and his advisor, evolutionary ecologist Lynn Adler, had reported in 2015 that a common parasitic infection of bumble bees was reduced when the bees fed on anabasine in sugar water. Anabasine is a natural alkaloid, nicotine-like chemical found in plant nectar. The researchers had hoped their finding was evidence that bees may use “nature’s medicine cabinet” to rid themselves of the intestinal parasite Crithidia bombi, which can decrease the survival of queen bees over the winter and hamper the success of young colonies in the spring.

But as they report in the current issue of PLOS ONE, those results were not borne out with further investigation. “Although uninfected bees in our experiments were not adversely affected by alkaloid-containing diets, anabasine had deleterious effects on infected bees. This is the first report of exacerbation of floral alkaloids’ negative effects by Crithidia infection,” they write.

Further, “This exacerbation is consistent with a growing body of work that suggests the negative effects of combined stressors – including infection, diet quality, and consumption of pesticides – on pollinator health and that widespread infection could have consequences for bees’ ability to tolerate phytochemicals.”

Palmer-Young notes, “Although this finding does not match the result of the initial set of experiments published in Proceedings B, anabasine is chemically and pharmacologically similar to nicotine, a well-known insecticide. Nicotine-like pesticides have been shown to reduce survival and impair immune function in honey bees, for example, and nicotine sensitivity can be exacerbated when bees are also faced with challenges to their immune systems. These interactions between nicotine-like chemicals and infection are consistent with our results, in which miniature queen-less colonies had reduced productivity when faced with pathogens plus a potentially poisonous compound.”

Palmer-Young and colleagues suggest that the alkaloid’s infection-reducing properties may depend on bee colony and nutritional status, rather than on the chemical’s direct toxicity to parasites. “The concentrations of anabasine tested here are 100-fold lower than those required to inhibit growth of parasite cell cultures,” Palmer-Young says, “and we did not find any evidence for variation in anabasine sensitivity across parasite strains. Hence, it does not appear that direct effects of anabasine on parasite growth can explain any anabasine-mediated effects on Crithidia infection.”

He adds, “The only experiment in which anabasine had effects on infection were when bees were deprived of pollen, their usual protein source. But it is known that bees require pollen to produce certain enzymes, including those that might break down compounds like anabasine. It may be that the absence of pollen in the diet interfered with the bees’ ability to detoxify anabasine, and thereby enhanced its pharmacological effect. It also seems that anabasine affects bees of different colonies in different ways.

“Anabasine consumption reduced infection in bees from two of the colonies in this experiment, but not in the other two. Alkaloids like anabasine can have strong effects on insect nervous systems and behavior. We need more research to explain how anabasine can affect parasite establishment, and how these effects are blunted or enhanced in bees with different genes and in different environmental conditions.”

Palmer-Young says, “Another factor to consider is that for the bees, a key outcome is the success of the colony, not necessarily the individual. Even if anabasine reduces levels of infection in individual bees, it may not improve the survival of workers or the reproductive output of the colony. For example, a healthy bee may support higher numbers of parasites, so reduced infection level could conceivably reflect reduction in bee health rather than improvements. And in terms of reproductive metrics, in our experiments with micro-colonies–groups of 3 bees reared together–feeding anabasine to bees with Crithidia infection reduced survival and weight of developing larvae.”

In other words, anabasine may aggravate, rather than ameliorate, the stress of bees faced with diseases. This work was supported by grants to Adler from the National Science Foundation and the USDA National Institute for Food and Agriculture (NIFA), and a NIFA pre-doctoral fellowship to Palmer-Young.

—University of Massachusetts at Amherst
via EurekAlert!