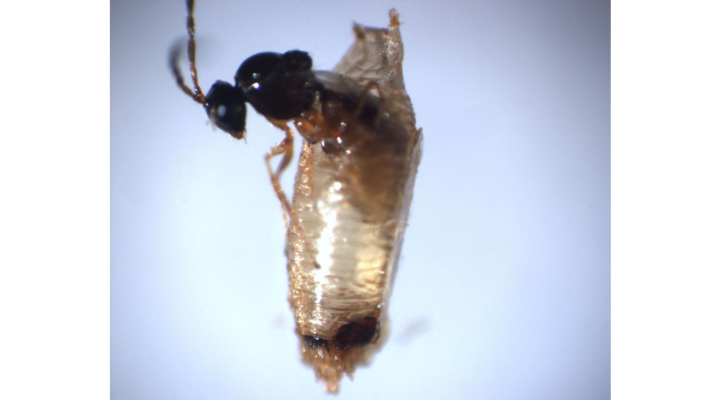 NEW YORK — City College of New York biologist Shubha Govind and her research team have identified the composition of “virus-like particles” (VLPs) found in the venom of a wasp that is a parasite of fruit flies. Invisible to the eye, wasp VLPs suppress the flies’ immune responses by killing their blood cells.

Wasps lay their eggs along with spiked VLP particles into the worm-like immature bodies of Drosophila melanogaster, the long-venerated genetic model of human disease and development. In the wild, parasitic wasps attack insects and are used to naturally control crop damage by insect pests. The Govind lab has developed a model to study this host/parasite interaction in the laboratory. While the particles were originally termed “virus like” due to their size and structure, this work has shifted that view.

The new study reports that VLPs have a profile of “extracellular microvesicles” that are microscopic, membrane-bound transport structures most animal cells use to package and traffic proteins to the outside. Strikingly, VLPs also have proteins that resemble bacterial proteins, found on their needle-shaped “injectisome” used to invade animal cells. The VLP proteins are similarly located on their surfaces/spikes, suggesting parallel mechanisms of invading hosts’ blood cells.

Given the VLP particles’ mixed prokaryotic/eukaryotic properties, the researchers have renamed them MSEVs for “Mixed Strategy Extracellular Vesicles.”

Cornell's Ag-Analytics ahead of the curve