Home / National / Researchers examine herbicide resistance
A new user experience is coming! We'll be asking you to login to your Morning Ag Clips account March 1st to access these new features.
We can't wait to share them with you! Read more here. 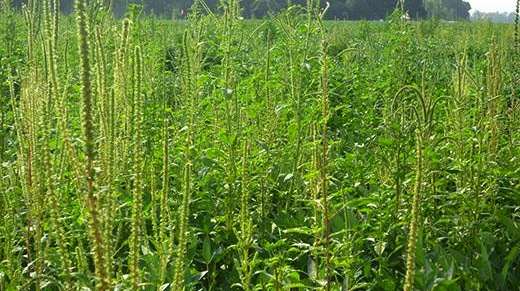 URBANA, Ill. — Palmer amaranth is a nightmare of a weed, causing yield losses up to 80 percent in severely infested soybean fields. It scoffs at farmers’ attempts at control, having evolved resistance to six classes of herbicides since its discovery in the United States 100 years ago. And now, scientists have discovered it has two new tricks up its sleeve.

About a year ago, a group of researchers discovered Palmer is resistant to the herbicide class known as PPO-inhibitors, due to a mutation–known as the glycine 210 deletion–on the PPX2 gene.

“We were using a quick test that we originally developed for waterhemp to determine PPO-resistance based on that mutation. A lot of times, the test worked. But people were bringing in samples that they were fairly confident were resistant, and the mutation wasn’t showing up. We started to suspect there was another mechanism out there,” says University of Illinois molecular weed scientist Patrick Tranel.

Tranel and his colleagues decided to sequence the PPX2 gene in plants from Tennessee and Arkansas to see if they could find additional mutations. Sure enough, they found not one, but two, located on the R98 region of the gene.

Furthermore, some of the resistant plants had both the glycine 210 deletion and one of the new R98 mutations. Tranel says it is too early to say what that could mean for those plants. In fact, there is a lot left to learn about this resistance mechanism.

“We don’t know what level of resistance the new mutations confer relative to glycine 210,” Tranel says. “There are a lot of different PPO-inhibiting herbicides. Glycine 210 causes resistance to all of them, but we don’t know yet if the R98 mutations do.”

The team is now growing plants to use in follow-up experiments. Tranel hopes they will be able to determine how common the three mutations are in any given population. “That way,” he says, “when a farmer sends us a resistant plant and it doesn’t come back with the glycine 210 deletion, we will be able to tell him how likely it is that he’s dealing with another one of these mutations.”

In the meantime, other research groups or plant testing facilities could use the new genetic assay to detect the mutations in Palmer samples. Tranel hopes they will. “The more labs testing for this, the more we learn about how widespread the mutation is,” he says.

Consider texture in your garden plan