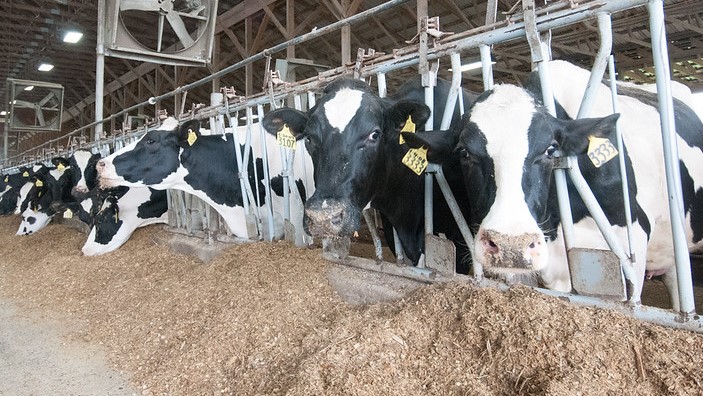 “We have two Fitbits on every cow,” Southwest Regional Dairy Center Director Barbara Jones said in the press release. “They help us to monitor their health, and to keep them content. And that matters to us because we truly do care about cows, as all producers do.” (U.S. Department of Agriculture, Flickr/Creative Commons)

The researchers are saying that tracking a cow’s eating, sleeping and movement helps them take better care of the animals, according to a press release from the Texas A&M University System. The devices track how long cows eat, how long they lay down and how many steps they take, while another wearable device monitors how much milk each cow gives.

“We have two Fitbits on every cow,” Southwest Regional Dairy Center Director Barbara Jones said in the press release. “They help us to monitor their health, and to keep them content. And that matters to us because we truly do care about cows, as all producers do.”

The data can warn producers that a cow may be sick before the cow starts showing symptoms. The devices also free up time for the dairy producer, who can tend to other business instead of monitoring their herd visually, according to the press release.

“Being able to track the health status of each and every cow with actual data and not just the ‘eye test’ will go a long way in identifying health issues earlier and provide more immediate care,” Kingston said. “This, in turn, will help lower costs for medical care and increase the production time for the cow. In my experiences, farmers and ranchers take animal health and care very seriously. This is another tool they can use to do that better.”

Former dairy farmer Tuck Densmore, who is also in charge of the dairy show division at the Parker County livestock show, said a dairy cow’s health can depend on its environment. Dairy cows are healthier when they can get more time to walk around and eat fresh grass, the Weatherford Democrat reported.

“Some (dairies) have the environment where cows never leave the lot,” Densmore said. “They go in the milk barn and they go back to a lot and they stand in a lot all day. Some dairies have it to where their cows, when they’re not being milked, go out into a pasture and actually go eat grass.”

Dairy farmers usually determine a cow’s health by looking at it, Densmore said. To keep cows healthy, their environment needs to be clean, and quality feed needs be provided. Sickness in dairy cows can affect the milk if the cow has a fever.

About 10% of dairy farmers use wearable technology now, but as labor costs rise, more dairy producers are expected to take the technological leap, Jones said.

“The research we do here helps to make sure the cows stay content and happy,” Jones said. “That not only benefits the animal, it makes life easier for the producer, and allows them to make better decisions on the farm.”

Cost of the technology may stand in the way of farmers using it, Kingston said, but farmers may use it more once they see a return on their investment. So far, Kingston said he hasn’t heard of the devices being used in Parker County.

“Production and animal care practices have advanced so much over the years,” Kingston said. “I don’t see why dairy farmers won’t start using this technology if it can improve their management practices on the farm.”

“The whole point is milk production, and however many steps a cow takes a day, does that affect the amount of milk it makes? No,” Densmore said. “That is all affected by their breeding and the nutrition that they’re given each day. I guess it could have a small advantage. If you’re tracking it, you want them to be healthy and if they’re not getting enough steps a day, that’s probably not as healthy as the ones who are.”

–By MADELYN EDWARDS The Weatherford Democrat