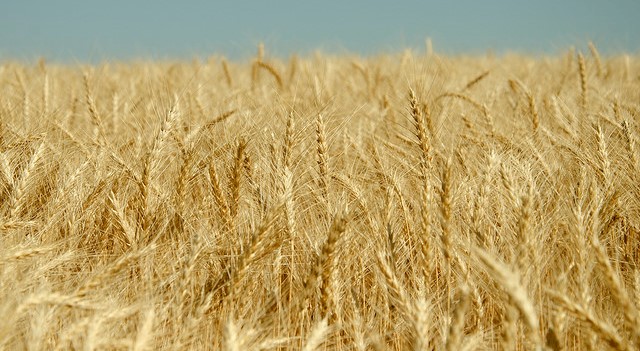 While genome presentations for other crops have been done, doing the same thing for wheat has taken time because it's a complicated organism whose wheat genome is more than five times bigger than the human genome. (USDA NRCS Montana, Public Domain)

MANHATTAN, Kan. (AP) — More than 200 researchers around the world have published a research article saying they finally cracked the complete genome of wheat after 13 years of work.

Kansas State University scientists, who collaborated with the International Wheat Genome Sequencing Consortium on the project, said in a news release that the work will pave the way for wheat varieties better adapted to climate challenges with higher yields and better nutrition.

The research article published in the journal Science was authored by scientists from 73 research institutions in 20 countries. It presents the genome of the bread wheat variety Chinese Spring. It is the highest-quality genome sequence produced to date for wheat, the world’s most widely cultivated crop.

“Completion of the sequence is a landmark event that will serve as a critical foundation for future wheat improvement,” said Kansas State agronomy professor Allan Fritz said. “It is the key to allowing efficient, real-time integration of relevant genetics making the selection process more efficient — it’s a turbocharger for wheat breeding.”

While genome presentations for other crops have been done, doing the same thing for wheat has taken time because it’s a complicated organism whose wheat genome is more than five times bigger than the human genome.

“If we know what genes have favorable traits and where they are located in the genome, we can use DNA marker technology to select them,” said Jesse Poland, an associate professor at Kansas State and director of the director of Wheat Genetics Resource Center. “This is kind of a roadmap or blueprint for that.”

Kansas farmers grow an average of 340 million bushels of wheat each year, but planted acres have dropped over the past decade from 10 million acres to fewer than 8 million.