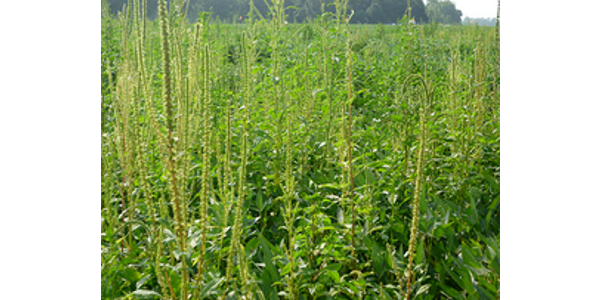 The idea is to use genetic modification techniques to change the sex ratio – the ratio of males to females – in waterhemp and Palmer amaranth populations. Theoretically, with the right genetic manipulation, every mating would result in only male offspring. (Courtesy of University of Illinois)

URBANA, Ill. — The USDA’s National Institute of Food and Agriculture has announced a $500,000 grant to University of Illinois researchers in the Department of Crop Sciences. The project will lay the groundwork towards developing a new type of weed control system, known as genetic control, for waterhemp and Palmer amaranth.

“Currently, we use chemical, physical, cultural, and biological control strategies to reduce weed populations. A genetic control strategy would be a way to introduce specific genetic controls that could change and ultimately eliminate the population,” says Pat Tranel, molecular weed scientist, interim head of the Department of Crop Sciences at U of I, and principal investigator on the grant.

The idea is to use genetic modification techniques to change the sex ratio – the ratio of males to females – in waterhemp and Palmer amaranth populations. Theoretically, with the right genetic manipulation, every mating would result in only male offspring. If this occurred over multiple generations, every individual in these populations would eventually be male. Reproduction would cease and populations would crash.

The concept is similar to a controversial strategy being tested for mosquito control. In that case, when genetically modified males are released and mate with normal females, the offspring die before maturity. The strategy, according to proponents, could reduce incidence of Zika, malaria, and other mosquito-borne diseases.

Tranel says a similar strategy in waterhemp and Palmer amaranth could avoid major crop losses as the herbicide-resistant weeds become less and less responsive to existing control strategies. But he is quick to point out that there is a lot of work to do before he and his team can even test the proof-of-concept.

The researchers first need to identify the genes controlling inheritance of gender in both waterhemp and Palmer amaranth. They already stumbled across a location in the genome of certain waterhemp females that leads to non-viable male offspring, but they still haven’t confirmed exactly how it works or developed the technology to put this gene region into another plant.

Even if the project and future research result in a working genetic control strategy for the weeds, Tranel says producers will still need to rely on proactive management using all available tools.

“You’d first use all your normal weed control practices to get rid of as many waterhemp plants as you can. Let’s say you end up with five females per acre that are going to seed; now you actually have a chance of swamping out and pollinating those five females,” he says. “I’d never see this as replacing all your other strategies.”