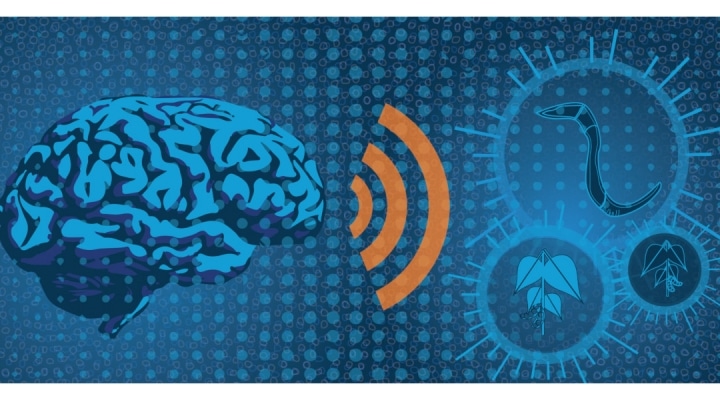 Failure of SCN-resistant crop varieties has left the agricultural industry scrambling for a new solution. A confluence of events led to the newest efforts to combat SCN, which involve connectomics – a subfield of neuroscience that studies comprehensive maps of connections within an organism’s nervous system. (Illinois ACES Image)

URBANA, Ill. — Lurking in more than 99% of soybean fields across the Midwest is a worm capable of feeding on and damaging entire crops. Millions of dollars have been spent trying to combat these destructive pests through the development of resistant soybean plants, but after decades of successful use, those solutions have begun to fail. Once again, soybean production is in trouble, and researchers are being forced back to the drawing board, but this time they are looking to attack the nematode from within.

Soybean cyst nematodes (SCN), or Heterodera glycines, have cost Illinois farmers millions of bushels of production since they were first discovered in the Midwest in 1957. They have been the most damaging soybean pathogen in the country since 1974, and the failure of the resistant crop varieties has left the agricultural industry scrambling for a new solution. A confluence of events led to the newest efforts to combat SCN, which involve connectomics – a subfield of neuroscience that studies comprehensive maps of connections within an organism’s nervous system – and an abandoned laboratory in Maryland.

In the 1980s, researchers at the MRC Laboratory of Molecular Biology (LMB) in England created the first-ever reconstruction of an organism’s full nervous system. The organism was a nematode called Caenorhabditis elegans (C. elegans). The team took electron micrographs (high-resolution images of thin slices of the specimen), printed them, and then hand-traced them to map out the synapses of the nematode. Decades later, then-graduate-student Lav Varshney, a machine learning expert, and his fellow researchers at Cold Spring Harbor Laboratory used the original images, which had recently been saved from destruction, to complete and correct inconsistencies in the original mapping of the worm’s neuronal network.

“Since neuronal networks are the physical substrates upon which neural functions are carried out, their structural properties are intertwined with the organization and logic of function,” said Varshney, an associate professor of electrical and computer engineering. “As such, full neuronal network reconstruction is powerful because it allows one to develop theoretical principles to explain how structure governs function.”

Since Varshney’s graduate work, researchers have fully reconstructed the neural network of only one other species, the ascidian Ciona intestinalis. The importance of these reconstructions is that they provide mappings of the connectome – that is, comprehensive maps of the neural networks in the brain. These maps allow researchers to determine which synapses are related to various functions, such as feeding and reproduction. Understanding the areas of an SCN’s brain involved in feeding would allow researchers to target those areas. In particular, it is already known that as part of their eating process, SCNs deposit a secretion from their esophageal glands onto a soybean plant’s roots, thereby preparing a feeding site. Preventing that secretion could be the key to ending SCN’s reign of destruction.

Two decades before the Caenorhabditis elegans connectome was reconstructed at LMB, a United States Department of Agriculture nematologist in Maryland named Bert Endo was collecting electron micrographs of SCN by hand, laying an incredible foundation for the current research. He lacked the sophisticated technology available to researchers today, so he used a laborious process that involved making very thin slices of SCN specimens, taking pictures of them with an electron microscope, and then developing the negatives in a darkroom, resulting in images of individual sections of the nematode.

During his three-decade career, Endo created 40,000 physical SCN micrographs, a treasure trove of data for researchers. Unfortunately, after his retirement in 1995, the building that housed his lab was damaged by a hurricane and scheduled for demolition. University of Illinois nematologist Nate Schroeder heard about the situation and couldn’t bear to let the massive amount of data go to waste.

“I flew out there, rented a U-Haul, and spent a day going into this abandoned building and hauling out thousands of micrographs,” said Schroeder, associate professor of crop sciences. “I had to wear a mask; animals had gotten into the space. It was kind of like going into an abandoned tomb digging out his valuable material.”

It may have been an unorthodox way to collect data, but Schroeder, who has dedicated his career to using electron microscopy to study the anatomy of nematodes, knew the importance of the baseline, historical images.

“These data were collected before the explosion of online journals and digital cameras, so only a fraction of all the images had been seen by the research community,” said Schroeder. “These data will not only help validate our efforts, they will also serve as a resource for other researchers working on SCN and other species.”

For the past year, undergraduate students have been digitizing the crucially important micrographs, which Schroeder will eventually organize and annotate. While the micrographs provide a great set of baseline data for the group’s research, it won’t be possible to develop a connectome or discover every synapse using only these images as Endo didn’t photograph the same portions of all the nematodes and didn’t put the micrographs in order. New data, developed with new technology, is needed to finalize the neural network, which is where Schroeder and Varshney are starting.

Varshney worked with micrograph-derived data in grad school, but his research at the time focused more on machine learning, information theory, and the use of artificial intelligence for social good. A collaboration with a nematologist would have seemed unlikely. However, all that changed in 2016, when Varshney and Schroeder were randomly put in the same discussion group at a cross-campus digital agriculture meeting at the University of Illinois. Schroeder knew of Varshney’s work with Caenorhabditis elegans and they found they had a shared interest in broader neuroscience questions, although it wasn’t the only thing they had in common: the two scientists grew up in the same small town in upstate New York.

The improbable duo decided to explore their common interest and won a Future Interdisciplinary Research Explorations (FIRE) grant from Illinois’ College of Agricultural, Consumer and Environmental Sciences. That funding allowed them to collect preliminary data, which helped them get USDA funding for their current project on combatting SCN from within.

“We want to take the information we gather and target a circuit or target individual cells that control feeding,” said Schroeder. “Our goal is to reduce feeding in this nematode while not impacting all the other nematodes in the soil. In a typical field of crops, there are plant parasites like SCN, but there are also beneficial nematodes we don’t want to impact.”

The first step in Varshney and Schroeder’s interdisciplinary research will be to develop updated micrographs using thin sections of SCNs to get images of every synapse and reconstruct the worm’s esophagus. At that point, Varshney can begin to develop models of the neural network.

The goal of Varshney’s modeling will be to develop a systems-theoretic model of the nervous system and then use network control theory to mathematically determine which synapses or which neurons are the most important for feeding behavior. He will determine what muscles are involved in the feeding process, what circuits are important to feeding behaviors, and how these processes are controlled.

Once the entire SCN neural network has been mapped and modeled, Varshney and Schroeder can develop a plan to attack the parts of the nervous system found to be relevant to feeding behavior. The goal will be to cause irregularities in an SCN’s motor control system to stop it from attaching to soybean roots, and thus prevent it from devastating soybean yields.

The ongoing research could yield new insights not only into future agricultural pest control practices, but also into neurobiology more broadly. Although they are both nematodes, SCN and Caenorhabditis elegans have different feeding behaviors, which resulted from a mutation that occurred sometime during their evolution. Once the nervous systems of these organisms are mapped, researchers will be able to compare their similarities and differences, which will have significant implications for the field of comparative connectomics.

“Since genetic sequences of many organisms have been sequenced over the last few decades, you can compare different species on the tree of life. Now you’ll be able to do the same thing for connectomics and begin to understand differences and similarities between different nervous systems,” said Varshney.

Varshney explains that SCN and Caenorhabditis elegans are evolutionarily close, while Ciona intestinalis is quite far away from them on the evolutionary tree. When their connectomes are compared, researchers might find a deeply preserved evolutionary trait or an expression of convergent evolution (wherein similar traits independently evolve multiple times). Knowing if, when, why, and how evolution has happened would offer major insights into the fundamental principles governing nervous systems. Comparing the SCN connectome with those of Caenorhabditis elegans and other species could lead to insights into how nervous systems evolve to meet new challenges.

Soybean cyst nematodes aren’t the only pests that the research may be able to combat. Schroeder believes that because other plant parasitic nematodes are similar from an evolutionary standpoint and in feeding habits, the information gathered about the SCN connectome can help farmers in other ways.