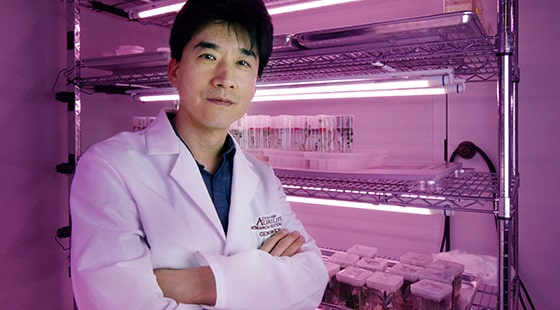 COLLEGE STATION, Texas — A multi-institution, international study led by Texas A&M AgriLife Research will investigate how a process that triggers DNA repair in plants also plays a role in strengthening their disease immunity.

When invading pathogens infect plants, the enzyme poly(ADP-ribose) polymerase attaches the molecule poly(ADP-ribose), or PAR, to certain proteins. This process is PARylation, and it activates a number of responses to pathogens, including DNA repair, immune responses and cell death, among others.

“We are most interested in the link between DNA repair and immune responses,” said He. “We know a lot about how they function individually. But new evidence suggests that PARylation could be a mechanical link between them.”

This is the crux of their research, and it is most likely applicable to all crop plants. Among crops, Song said, PARylation and plant immune response are genetically well conserved, or largely universal.

PARylation has been studied extensively in humans, due to its profound medical impact on many inflammatory and malignant disorders, namely cancer and related chemotherapy, he said.

“But the function of PARylation in plants is poorly understood,” Song said.

Over the next two years, Song and He — along with collaborators at academic and research institutions across the globe — aim to identify how PARylation targets immunity genes and proteins. By determining the intricately connected functions of DNA repair and immune responses, they will gain insight into how PARylation protects DNA from pathogen damage throughout an entire plant.

Planning for resilience in crop production

“The work of this multilateral project will provide insights that can signal a big next step in resilient crop production that is sustainable into the future,” Song said.

The work dovetails with AgriLife Research’s overarching push to meet demands of a changing climate, and to be able to grow crops sustainably in increasingly harsher conditions, especially in urban and suburban settings.

The push includes a new urban research center in Dallas. The center houses Song’s lab and focuses on growing food in cities, preserving important water and land resources, as well as enhancing human health. The genomics program at the Dallas Center, led by Qingyi Yu, Ph.D., professor of plant genomics, is also collaborating on the PARylation research project.

Other collaborators are the University of Texas Southwestern Medical School, The University of Wisconsin-Madison and researchers from a number of national and international academic and scientific research institutions.

U.S. farmers, ranchers at the forefront of climate-smart farming
April 20, 2021