Home / Texas / Research teams make plant nutrient delivery breakthrough
A new user experience is coming! We'll be asking you to login to your Morning Ag Clips account March 1st to access these new features.
We can't wait to share them with you! Read more here. 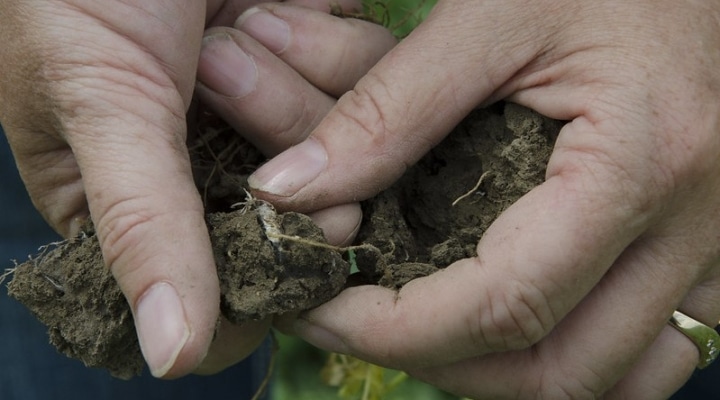 This discovery could lead to groundbreaking agricultural practices that allow for a reduction in the amount of nitrogen fertilizer required for crop production, which will help reduce production costs and benefit the environment by reducing agrochemical use. (Stock photo via USDA NRCS Montana, Public Domain)

LUBBOCK, Texas — When most people think of fungi, the thoughts are usually not good, turning to something that does damage more than those that are actually helpful.

Yet, fungi play a critical role in the growth and development of plant life and have for millions of years. Scientists have known for a long time that arbuscular mycorrhizal (AM) fungi that live in harmony with about 90% of land plants and play a key role in their root systems, are responsible for carrying needed phosphate to plants to help growth.

Now, however, thanks to a discovery by a team of scientists from Texas Tech University’s Institute of Genomics for Crop Abiotic Stress Tolerance (IGCAST) in the Department of Plaint and Soil Science, and the Nanjing Agricultural University’s State Key Laboratory of crop Genetics and Germplasm Enhancement, that symbiotic role may go even further.

That research team, which included professor Guohua Xu, Prof. Aiqun Chen and Dr. Huimin Feng from Nanjing Agricultural University and, Luis Herrera-Estrella, the President’s Distinguished Professor of Plant Genomics and director of IGCAST, and assistant professor Damar López-Arredondo, discovered that AM fungi also acted as a supplier of nitrogen to the plant, the protein (NPF4.5) responsible for transporting nitrates from the fungi to the plant, and that this symbiotic nitrate pathway and the function of the protein are present in crops such as rice, and probably most other plant species.

The results from the paper, “Functional analysis of the OsNPF4.5 nitrate transporter reveals a conserved mycorrhizal pathway of nitrogen acquisition in plants,” were recently published by Proceedings of the National Academy of Sciences (PNAS) of the U.S.

Xu highlighted their finding that the fungi colonization efficiency, promotion of plant growth and nutrient uptake were maintained and even enhanced at high nitrogen supply levels, which is opposite to the high phosphate suppressed colonization, indicating the general contribution of mycorrhizal route to improving N use efficiency at varied N presence.

This discovery could lead to groundbreaking agricultural practices that allow for a reduction in the amount of nitrogen fertilizer required for crop production, which will help reduce production costs and benefit the environment by reducing agrochemical use.

Hundreds of millions of years ago, when plants moved from aquatic origins and began taking over land masses, their lack of a strong root system became a hinderance in obtaining water and nutrients. Herrera-Estrella said fossilized evidence showed that, early in in the evolutionary process, land plants developed the relationship with mycorrhizal fungi, which helped improve the fitness of host plants by facilitating mineral nutrition and water absorption and by increasing tolerance to biotic and abiotic stresses.

Herrera-Estrella pointed out, though, that past research has discovered that the symbiotic relationship between plants and AM fungi is most active in soil with low phosphate availability and suppressed in soil with high levels of available nutrients. That means cultivated crops that are highly fertilized see a severely reduced or completely suppressed impact from mycorrhiza.

The goal of the research was to determine whether mycorrhiza could provide other nutrients such as nitrogen to the plant. Indirect evidence has shown the fungi could supply the plant with ammonium (NH4+) as a nitrogen source, but that it is quickly converted into nitrate (NO3-) by the microbes in the aerobic soil. That means that under most soil conditions, nitrate is the dominant form of N supplied to the plant.

In order to test for nitrate transfer ability, the researchers used nitrogen isotopes to determine the capacity of the fungi to take nitrate ad deliver it to the plant for intake. Researchers also identified the gene (NPF4.5) specifically activated in rice roots when joined by mycorrhizal fungi and were able to identify the role of this gene in nitrate delivery by producing rice mutants that did not have this transporting gene.

“We found that when the gene is inactivated, the amount of nitrate that the plant can get from the fungi is drastically reduced,” Dr. Chen said. “Thus, we functionally confirmed that NPF4.5 was the important protein in the transport of nitrogen from the fungi to the plant. We also used plant transformation to generate the rice plants that enrich NPF4.5 proteins in the absence of the mycorrhiza. We found that these transgenic plants can produce more biomass and show higher nitrogen uptake efficiency than normal plants when grown in nitrate contained medium, which has a great potential for use in agriculture.”

Researchers estimate that rice containing the mycorrhizal relationship between plant and fungi could receive more than 40% of its nitrogen due to the mycorrhizal pathway and that the specific nitrate transporter gene, NPF4.5, accounted for approximately 45% of the mycorrhizal nitrate uptake.

López-Arredondo said the next steps in the project will be to test the transgenic plants under field conditions and deeply understand the mechanisms that specifically activate the NPF4.5 nitrate transporter gene when the plant joins with the fungi, as well as discovering the chemical signals the fungi send to the plant to specifically activate this and other nutrient transporter genes probably required for this interaction.

Herrera-Estrella, an Emeritus Professor of Cinvestav in Mexico and member of the US National Academy of Sciences stated “This is an interesting and productive collaboration between Texas Tech and the Nanjing Agricultural University,” “This type of international collaboration can rally boost the advancement of science.”