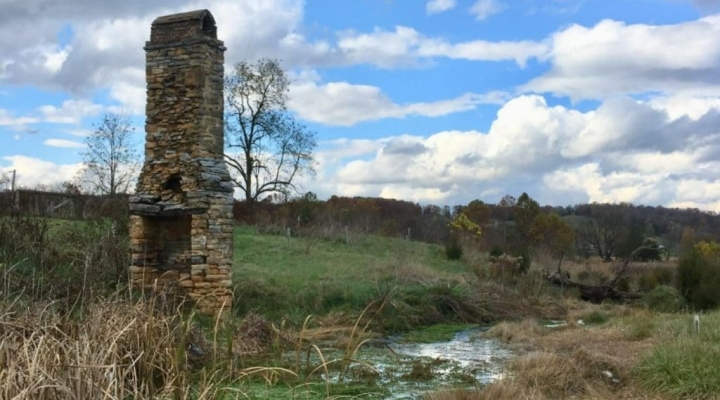 The Virginia Tech team will pilot an innovative treatment technology on a spring in the Shenandoah Valley. The U.S. Geological Survey estimates that this spring discharges almost 900,000 gallons of water per day. (Photo by Kurt Stephenson for Virginia Tech)

BLACKSBURG, Va. — Excess nutrients in water can affect human health, the environment, and the economy, costing federal, state, and local governments billions of dollars per year to minimize the impacts. In order to evaluate and measure nitrogen — one of the key nutrients —  a group of scientists from Virginia Tech is developing and evaluating nitrogen removal programs at a test site in Virginia.

The team is investigating options for “pay for demonstrated performance” programs that compensate agricultural landowners for nutrient reduction removal success in local water systems. This program would create incentives to manage bioreactors to maximize removal performance. The four-year project is funded by a $499,627 grant from the U.S. Department of Agriculture.

Harmful algal blooms, dead zones, and fish kills are the result of eutrophication, which begins with the increased load of nutrients to fresh and coastal waters.

An important source of nitrogen is historical applications of fertilizers and manures, called legacy nitrogen. This nitrogen leaches through soils and into groundwater. Legacy nitrogen may have been stored in groundwater aquifers for decades before being discharged in springs.

Although the water is clear from the Shenandoah Valley spring where the team is working, it contains relatively high levels of nitrate. The levels are not high enough to be of concern for human health, but the nitrogen does contribute to eutrophication, most notably the Chesapeake Bay.

One of the few technologies available to treat legacy nitrogen is using bioreactors to remove the nitrogen from the water by chemical reduction.

Bioreactors are lined beds filled with carbon material, typically wood chips. The carbon provides energy to microbes that convert nitrates into dinitrogen gas, which is biologically unavailable for plant growth.

Zachary Easton, co-principal investigator of the project, professor, and Virginia Cooperative Extension specialist, as well as Ph.D. student Elyce Buell of the Department of Biological Systems Engineering’s eLAB are measuring the flow and water chemistry in and out of the bioreactor and testing management alterations to optimize nitrogen removal. The preliminary analysis shows the bioreactor removes about 20 to 30 percent of the nitrogen that flows into it.

Bioreactors have two advantages. First, nitrogen removal performance can be directly observed by measuring flow in and out of the bioreactor and sampling the amount of nitrogen in that water. Second, the per unit removal costs are relatively low.

So the question becomes how to get agricultural landowners interested in installing bioreactors on their properties with water sources. Traditional incentives require the landowners to pay upward of 75 percent of the cost of installation. Since bioreactors have high up-front costs and provide the landowner with no other benefits, few are willing to make the investment.

Virginia Tech student Paige McKibbon of the Department of Agricultural and Applied Economics conducted an analysis to examine the risk and returns to landowners who install bioreactors based on different prices and contract options. McKibbon’s work found that the price the government would need to pay annually to induce investments in bioreactors would be around $25 per pound.

Market-like programs create direct financial rewards for measurable nutrient reductions. Most agricultural payments for service incentive programs, including most existing nutrient trading programs, are based on modeled water quality outcomes resulting from different agricultural management practices. Payments for demonstrated performance (or measured load reductions), however, are rare because of the implementation challenges associated with agriculture nonpoint source discharge. Bioreactors treating legacy nitrogen provide an opportunity to investigate the potential to improve the effectiveness and reduce costs of nutrient pollution control.

Philip Davis of the Virginia Department of Environmental Quality is soliciting interest from landowners in the Shenandoah Valley with springs that may be good candidates for treatment.