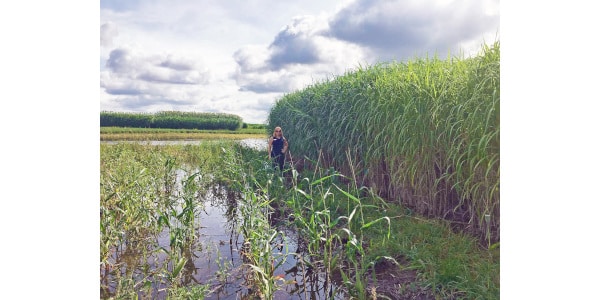 AMES, Iowa — Farmers who want to increase the productivity and economic performance of their farmed potholes should consider more flood-tolerant crops, such as miscanthus.

Recent research by Iowa State University scientists found expected increases in weather variability, especially more intense, frequent rainfall in the spring, are likely to adversely impact crop yields in areas susceptible to flooding and ponding. Their modeling, based on observed and predicted data, shows miscanthus, a grass species known for its high biomass production, is likely to have better survival and yields and could be more profitable.

“We wanted to look at this because what we’re doing with potholes is not working in many cases. This study gives more evidence that things are only going to get more difficult,” said Andy VanLoocke, associate professor of agronomy and one of the lead authors on the study published recently in the peer-reviewed journal GCB Bioenergy.

They conducted an in-depth case study focused on one field in central Iowa that included a farmed pothole. Crop yield data from combine yield monitors and hand harvests of miscanthus leaves were collected from the site and a similar, nearby location used as a research control, both on Iowa State research farms.

Edmonds was the primary modeler for the project. To study ponding depth over time, along with crop growth and yield, he adapted a spatially explicit software program, Agro-IBIS, to better estimate water depth and flow dynamics — and resulting crop yields. He tested the model against field observations and rainfall records from 2002-2016 and used the revised version to simulate the effects of several precipitation scenarios over 15 years on a conventional corn/soybean rotation and on an alternative perennial miscanthus cropping system.

The results predicted increases in the depth and frequency of ponding under all but one of the future rainfall scenarios, continuing recent observed trends.

The corn-soybean plantings within the field consistently yielded poorly and had greater total yield losses than miscanthus. The perennial system was significantly more resilient to wet periods that caused prolonged ponding, (though miscanthus can “drown out,” especially in the first few years after rhizomes are established).

A simple, 10-year budget analysis for the two cropping systems planted on the land within the farmed pothole showed significantly better profitability for miscanthus. The average predicted balance for the corn/soybean rotation was a loss of $392 per acre. In contrast, the miscanthus crop was predicted to show an average per-acre profit of $309

This was based on a current market value of $80/ton for miscanthus, which is primarily being used in Iowa as a poultry bedding and for co-firing in electricity production. This value is probably conservative VanLoocke said, since prices can be expected to increase as markets grow. The project’s budget analysis did not consider other potentially important economic factors, such as the influence of crop insurance that is more likely to mitigates losses for corn and soybeans.

“Diversifying cropland can be complicated, but this study shows it is worth it,” Heaton said. “Miscanthus demand is growing in Iowa, and we show it can give positive return on investment in places where corn/soy doesn’t, thereby increasing overall profit. Complementary Iowa State projects that are part of the Long-term Assessment of Miscanthus Productivity and Sustainability show miscanthus also reduces nitrate leaching up to 80% compared to corn.”

“Other water-tolerant crops may also have potential for production in farmed pothole areas, but for now, perennial miscanthus (species Miscanthus x Giganteus Greef et Deu) is one that has viable markets,” she said.

The team’s approach demonstrates that potholes can be individually modeled and the influence of weather and topography on yield quantified to inform management decisions. One of their early outcomes is an online Prairie Pothole Management Support Tool that can be used to anticipate the impact of future rainfall on pothole flooding and crop yields in a specific field. The open-source program was created by former graduate student Brady Nahkala (’20 MS agricultural and biosystems engineering) who worked on the project with Kaleita, and they plan to continue refining it.

“We need new solutions,” VanLoocke said. “Dumping 200 pounds of nitrogen on places where the crop doesn’t end up growing is not profitable, and it causes increased nitrate leaching and emissions of the greenhouse gas nitrous oxide.”

Funding for the project came from the U.S. Department of Agriculture National Institute of Food and Agriculture, the U.S. Department of Energy and the Leopold Center for Sustainable Agriculture. VanLoocke and Edmonds hope to scale up their modeling framework. In the meantime, they have started a new USDA-funded project to study miscanthus varieties and their potential as a crop for farmed potholes.

Wetland field day to be held near Coggon on September 29th

Women in Ag Leadership Conference to be held in Ames
October 26, 2021