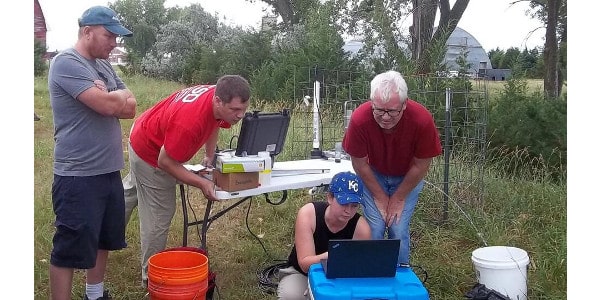 From left, Aaron Mittelstet, Troy Gilmore, Mikaela Cherry and Didier Gatsmana sample groundwater in the Little Blue Natural Resources District near Hastings in July 2018. A recent study from Cherry, doctoral candidate in the School of Natural Resources, and colleagues found that winter precipitation reloads most of the state’s groundwater supply. (Courtesy photo/Sydney Corcoran)

LINCOLN — When it rains, and even when it pours and floods like it did in Nebraska in late 2018 and through much of 2019, the precipitation that hits the surface doesn’t always factor in to recharging the state’s vast and vital groundwater supply.

In fact, the majority of precipitation doesn’t reach those depths. So when does it most often happen? A recent study led by Mikaela Cherry, a doctoral candidate in the University of Nebraska–Lincoln’s School of Natural Resources, found that winter precipitation reloads most of the state’s groundwater supply.

And learning when groundwater is recharging, Cherry said, could reinforce current efforts to limit how much nitrate reaches the supply.

Cherry said that exploring the water quality wasn’t part of the initial plan but turned out to be a key unforeseen benefit.

“When we approached the project, it was more about finding the when,” she said.

Cherry started her doctoral program two years ago, and her adviser, groundwater hydrologist Troy Gilmore, told her about a trove of data collected in 2011 by former Husker faculty member John Gates, who coordinated with Nebraska’s Natural Resources Districts to gather nearly 800 groundwater samples from across the state that year.

“(Gilmore) said, ‘Here you go,’ and that’s how I started working on it,” Cherry said.

Nebraska’s summers are typically wetter than the winter months, so why does the recharge happen more often during a drier season? There are several reasons, Cherry said. One is that potential evapotranspiration from soil and plants exceeds rainfall, meaning that there isn’t excess water available that can become groundwater recharge. Human impact is another reason. Nebraska’s groundwater supply is frequently used for irrigation-powered agricultural operations. In areas of intensive canal irrigation with the Platte River as the source, Cherry found what appeared to be a non-growing (winter) season recharge ratio that actually is mostly Platte River water recharged through canals. In some intensively pivot-irrigated areas, Cherry said, the water cycle has shifted the recharge signature toward the growing season.

“We’re not really sure why,” Cherry said. “It might be that people are over-irrigating, and you have precipitation plus irrigation that leads to recharge in the summer. Or it might be that something to do with the process of irrigation is altering the isotopic composition of groundwater, so it just appears to be more summer-based. Different types of irrigation can impact it differently, but we’re not quite sure why.”

Cherry said the research team was surprised that the data showed on such a fine scale when the groundwater recharged in areas with different types of irrigation. That information, she said, could help reinforce water-management practices that strive to limit and reduce nitrate levels in Nebraska’s groundwater supply.

Formed when nitrogen and oxygen combine, nitrates are prevalent in manure and inorganic fertilizers used by many agricultural operations. Nitrate is water-soluble and passes through soil to the groundwater table, where it can settle for decades. If nitrate levels are high in drinking water supplies, consuming it can have adverse health effects, especially for infants. Treating nitrate-rich drinking water is possible but costly.

“By understanding what times aquifers are recharging and vulnerable to contamination, we can improve water-quality best-management practices,” Cherry said. “An example of this might be fall fertilizer application. If we know that recharge is occurring in the non-growing season, then applying fertilizer during this time might mean more contamination than if the fertilizer was applied in the spring. Another issue is groundwater quantity. Climate change might shift precipitation patterns and timing as well as lengthen the growing season, which would impact the overall amount of precipitation that becomes groundwater. Since the majority of the state relies on groundwater for both drinking water and irrigation, these are areas where more information would help inform management decisions.”

The team’s paper was published in the March issue of Hydrological Processes. It was written by Cherry and features contributions from Gilmore; Aaron Mittelstet, assistant professor in the Department of Biological Systems Engineering; Didier Gastmans and Vinicius Santos of Sao Paulo State University; and Gates of CropMetrics.

Funding for the research was provided by the U.S. Department of Agriculture’s National Institute of Food and Agriculture and by the Nebraska Environmental Trust.

Nebraska Ethanol Board to meet June 10

The economics of agronomics: fungicide in 2020