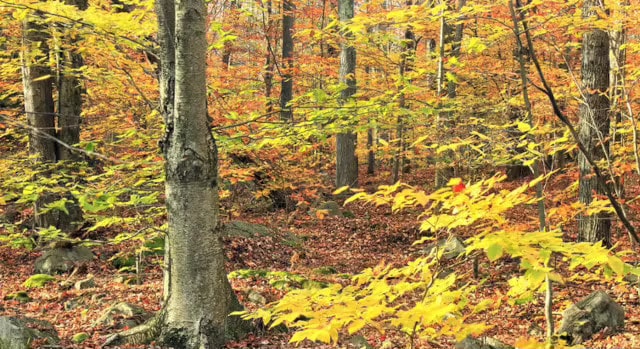 American beech trees in a forest. (Nicholas T/flickr, CC BY)

NOTRE DAME, Ind. — “Plant a tree” seems to be the go-to answer to climate change concerns these days. Booking a rental car online recently, I was asked to check a box to plant a tree to offset my car’s anticipated carbon dioxide emissions. In 2020, the governor of my state, Indiana, launched an initiative to plant a million of them within five years, and the state is a quarter of the way there.

The primary reason for this arboreal zeal is to capitalize on the power of trees to remove excess carbon dioxide from the atmosphere and turn it into wood, safely locking carbon away for decades to centuries.

The problem is that the fate of carbon stored in trees faces many challenges. Heat waves, logging, pests and wildfires can all destroy trees and release that carbon again. And most measurements of the carbon stored in forests’ woody biomass only extend back a few decades.

I lead the PalEON project, an initiative funded by the National Science Foundation that is working to reconstruct how the amount of carbon stored in U.S. trees ebbed and flowed over the past 10,000 years.

Our new reconstruction reveals in detail how forests in the upper Midwest gained almost a billion tons of carbon over the last 8,000 years, doubling their carbon storage. And then, in the span of just 150 years, almost all of that gain disappeared into the atmosphere.

The results offer lessons for today, particularly about the outsized role that a few tree species, human behavior and a changing climate can play.

How forests gained, then lost, a billion tons of carbon

Our forest story starts 10,000 years ago, after the massive Laurentide ice sheet that once covered a large portion of North America retreated from the upper Midwest – what is now Michigan, Wisconsin, Minnesota and the northern edges of Illinois and Indiana. In this early period of natural warming, ice-age forests of needle-leaved trees shrank and were replaced by new tree species slowly spreading northward from southern refuges.

Forest growth rose and fell over the thousands of years that followed as the climate went through warm and cool periods, the frequency and intensity of wildfires changed, and Native American land management strategies shifted.

Previous studies assumed that the amount of woody biomass – the carbon stored in trees – had been relatively stable over millennia before the industrial era. Instead, we were surprised to find that the Upper Midwest forests had steadily gained carbon for 8,000 years before Euro-American settlers began clearing large swaths of forest.

In much of the region, forests had become dominated by long-lived species that could store a lot of carbon as biomass. Two of those species stand out: American beech and eastern hemlock.

History in a grain of pollen

We know a lot of this thanks to tiny grains of ancient pollen and the Public Land Survey, a collection of highly detailed forest surveys conducted by government contractors in the mid-1800s, shortly before forest clearing took off.

Each year, trees release pollen, and some of that pollen falls into lakes, where it sinks into the mud and fossilizes. Scientists can study fossilized pollen in cross sections of lake bottom sediment to determine how old it is and the types of trees that were growing at the time. If a major fire came through, abrupt changes in the types of pollen in the sediment would give it away.

In a study recently published in the journal Science, Ann Raiho and other PalEON members mapped biomass changes in the Upper Midwest using a sophisticated statistical model based on the fossil pollen found in the sediment from a network of lakes. The Public Land Survey served as a sort of Rosetta Stone. The survey linked vegetation in the 1800s to the fossil pollen samples, allowing us to calibrate pollen levels with the amount of wood biomass.

Lessons from 10,000 years of forest growth and decline

Our maps of past biomass accumulation provide reason for optimism about the capacity of forests to sustainably store carbon for long periods, but also two warnings.

The optimistic take is that when forests dominated by old-growth species like American beech and eastern hemlock expanded, the forests stored large amounts of carbon in woody biomass for millennia. These two species contributed substantial carbon storage, particularly in the moister central and eastern parts of the region.

The first warning is that forests in the drier western part of our study area shrank when the climate became warmer and drier.

The second warning is that progress can quickly slip away. Although the Upper Midwest forests stored almost a billion tons more carbon than they lost over the last 8,000 years, that accumulation went back into the atmosphere over a short period of time as a result of logging and farming. We found the rate of woody biomass decline over the last 150 years was 10 times greater than in any other century in 10,000 years.

So, what does this mean for tree planting efforts today?

If my rental car tree happened to be an American beech, and if it were allowed to mature and propagate an old-growth forest in the Upper Midwest, then future forests could replicate the processes that stored carbon for thousands of years.

But that future presumes that drought, pests and wildfires associated with a rapidly warming climate don’t undo those efforts. A recent study suggested that forests around the world may be losing resilience to climate warming.

The capacity of old-growth trees to store carbon can also be undone by other threats that can be exacerbated by the changing climate. For example, beech bark disease weakens trees, allowing fungus to kill them – and it’s now threatening the Upper Midwest’s beech populations.

Finally, communities will have to balance the value of carbon sequestered in old forests with other priorities.

From a conservation perspective, both the high-biomass, old-growth beech and hemlock forests and the lower-biomass oak savannas were important components of Midwestern vegetation over the last 10,000 years. However, open oak forests are now endangered, and the practices needed for their recovery, like controlled burns, are designed to keep competing species at bay – including American beech.

The past offers guidance for managing forest change in the future, but not easy answers.