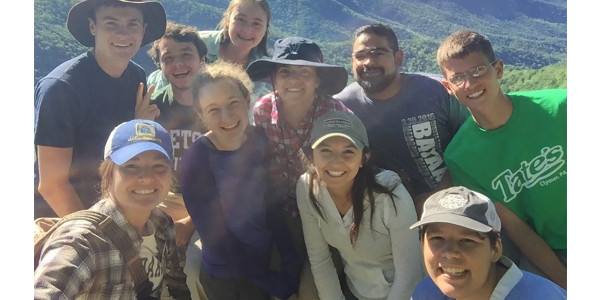 Participants in the BESST program not only conducted research, they also got to see the state, including the mountains. (Courtesy of NC State University)

RALEIGH — If you tour a university campus, you can probably spot the business college or chemistry labs, but finding the soil science department may be more challenging — and not just for a visitor. Many undergraduate students are not aware of soil science coursework or how it relates to majors like chemistry, engineering or biology. Joshua Heitman and Owen Duckworth, faculty members with NC State’s Department of Crop and Soil Sciences, wanted to change this by providing these students an opportunity to do research in soil science.

Heitman and NC State colleagues received a grant from the National Science Foundation to establish a Research Experience for Undergraduates in soil science. Their program, called Basic and Environmental Soil Science Training (BESST), hosted 10 students for 10 weeks in the summer. Students, who come from around the country, are paired with faculty mentors, develop an independent project and participate in a soil science field tour. The NSF funds provide a stipend for each student, plus housing and travel costs.

So far, the program has proven popular, receiving around 200 applicants for 10 spaces each year. Organizers aim to recruit students from under-represented groups in soil science, and from a broad range of academic majors including chemistry, engineering and environmental studies. Applicants do not have to have prior research experience, which helps to recruit students who may not have the opportunity to do research at their home institutions.

Judging from participant evaluations from 2015 and 2016, students are achieving the organizers’ goals: to gain a deeper appreciation for soils and knowledge of how soil science research applies to careers from geology to engineering. Here’s what several program alumni had to say about the program.

Born and raised in New York City, Erika Andujar says, “I actually didn’t know that soil science departments existed anywhere.” As an undergraduate studying environmental engineering at the City College of New York, Andujar participated in BESST in 2015. She says the program “changed my perspective on research, and it’s why I’m still doing research.”

For Andujar, the combination of doing her project and interacting with graduate students made her realize how capable she was, and she entered City College’s civil engineering master’s degree program in the fall of 2016.

“I feel like the best part about [BESST] it was just that I was exposed to so many different things,” she says. For example, the week spent visiting sites from the North Carolina coast to the Blue Ridge Mountains provided a new perspective. “It’s one thing to hear about [agriculture], but it’s another thing to go see a whole bunch of farms and kind of see how dependent people are on the quality of their soils,” Andujar says.

Andujar’s current plan is to become a professional engineer, but she says, “Whatever I decide to go into, I feel like I want it to deal with sustainability.”

As a chemical engineering undergraduate at Washington University in St. Louis, Lily Schacht wasn’t interested in doing academic research, but the BESST program changed her mind. Now, she says, “I definitely fully embrace the research side. I decided to get a Ph.D. because of the program.”

Schacht’s research at NC State focused on the potential for manganese oxides to limit arsenic contamination in groundwater. Looking back on the program, she says having prior knowledge of water quality helped her to “really [feel] comfortable doing the research.”

Schacht started as a Ph.D. student at the University of Wisconsin–Madison in the summer of 2017. “My degree will be in environmental engineering,” she says. “It combines soil science and water quality.”

Similar to other students, Schacht mentions that the program helped her build “soft” skills, like communication.  “During the week-long big soil field trip, I think everybody got a lot more confident using their background to explain [the] different concepts to each other. [This] helped everybody get a lot more comfortable with their knowledge.”

Students with Soils Background Can Participate

Samantha Croat participated in BESST in 2016. While the program emphasizes recruiting non-soil science majors, candidates with a background in soils aren’t excluded. Samantha Croat majored in agronomy and minored in soil science at South Dakota State University as an undergraduate. What she gained from BESST was “[learning] how a graduate project is developed and carried out. It takes a team with various skills and thorough planning for it to go smoothly.”

While the REDU program isn’t directed towards people who already have a background in soils, those with that experience aren’t excluded. “It attracts any students who may have an interest, which exposes more people to the soil world,” she says. “It also helped me learned the different perspectives students have on soil relative to their field of study.”

Her REU research project involved enhancing phosphorous uptake in corn plants by applying a copolymer. She did both a greenhouse study to measure uptake and a lab study to determine the solubility of phosphorus. Now in graduate school at North Dakota State University, Croat is using some of the same procedures she learned as an REU student in her current work focused on soil remediation at an oil spill site.

Having grown up in a farming community and having experience in soil science academics and research and academics, Croat sees opportunities to help farmers change their practices. “I would really like to work in extension, closing the communication gap between science and not only the farmer but the general public [too],” she says.