Home / California / Research offers sweet (potato) relief
A new user experience is coming! We'll be asking you to login to your Morning Ag Clips account March 1st to access these new features.
We can't wait to share them with you! Read more here. 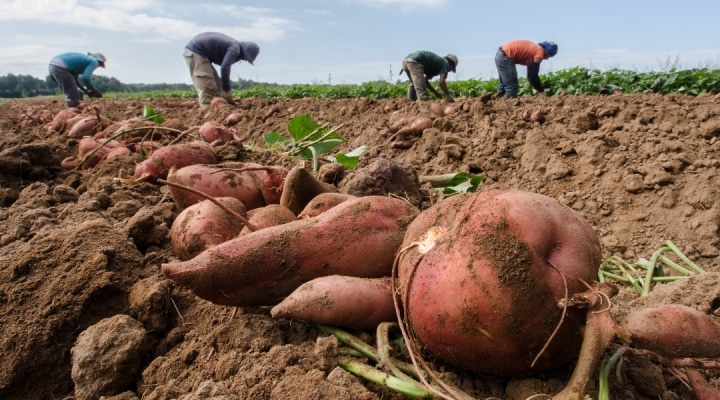 U.S. farmers have been increasing their production of sweet potatoes for years. And now the annual crop is worth more than $600 million. (U.S. Department of Agriculture, Public Domain)

CLEMSON, S.C. — As you start to plan for your Thanksgiving dinner, sweet potatoes are likely on the menu. Whether roasted and savory or topped with marshmallows, they’re a fall staple.

Despite being beloved by most, sweet potatoes are often misunderstood. They’re unrelated to potatoes, for starters. And they’re even different from yams.

Yet we can’t get enough. U.S. farmers have been increasing their production of sweet potatoes for years. And now the annual crop is worth more than $600 million.

To grow the best crop, farmers have to help their sweet friends fight back against the usual suspects: weeds. Weeds will steal water, nutrients and even sunlight. Left unchecked, weeds will completely ruin a field of sweet potatoes.

Herbicides can help, but they’re not a cure-all. Controlling broadleaf weeds is especially tough. That’s because sweet potatoes are also broadleaf plants, which means they will also be damaged by herbicides designed to attack broadleaf weeds.

Enter “safeners.” These chemicals can make herbicides safer, hence their name. Recently, Giovanni Caputo and his team from Clemson University and the U.S. Department of Agriculture tested several safeners to see if they could help sweet potatoes. They discovered a few new formulas that might give a boost to farmers.

The researchers recently published their findings in Agrosystems, Geosciences and Environment Journal, a publication of the American Society of Agronomy and the Crop Science Society of America.

They set up their experiments in a greenhouse in South Carolina, a major sweet potato producing state. The scientists tested the herbicides bentazon and mesotrione on two varieties of sweet potatoes, “Beauregard” and “Covington.” The safeners they used included two types of plant hormones, which help the plant respond to stress. They also tested melatonin which is well-known for its role in the sleep cycle in humans, but it also occurs naturally in plants and is involved in growth and photosynthesis.

The researchers found that different safeners worked better depending on the variety of sweet potato and the herbicide being used. For example, melatonin greatly reduced how much bentazon injured “Beauregard” plants. But the Covington variety didn’t benefit as much. Instead, “Covington” plants were best protected by ascorbic acid, better known as vitamin C.

Similarly, melatonin and ascorbic acid provided the best benefit with the mesotrione herbicide. But the other plant hormone they tried didn’t help as much for either variety.

To make sure the safeners didn’t affect the herbicide’s ability to kill weeds, The Clemson team tested the new formulas on Palmer amaranth and yellow nutsedge, both big weedy pests. Fortunately, the new formulas were still effective weed killers. It’s not entirely clear why the safeners helped the sweet potato plants but not the weed. But more tests might reveal what causes the different reaction.

The upshot is that these new formulas seem promising for providing farmers with new tools to protect their crops from damaging weeds. They’ll need to perform more trials, especially in real farm fields, to perfect the formula. But a new herbicide system that could better protect sweet potatoes would be a boon to farmers and Thanksgiving tables alike. Now that’s a sweet deal.

Funding for this research was provided by Agricultural Society of South Carolina.