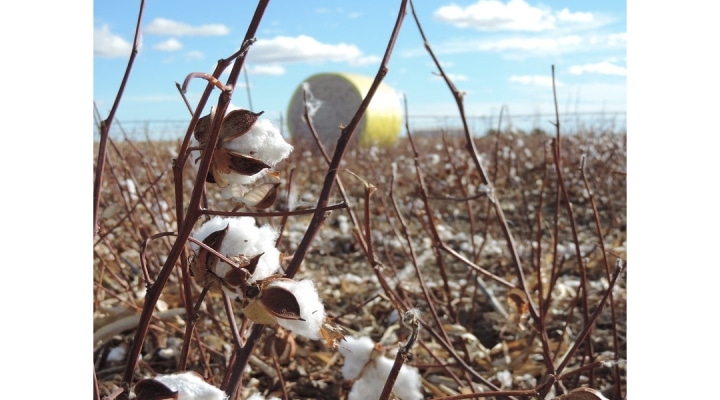 K-State researchers have teamed with colleagues at Oklahoma State University to study the long-term environmental and economic viability of cotton production in areas where water is scarce. (K-State Research and Extension, Flickr/Creative Commons)

GARDEN CITY, Kan. –A project that focuses on the sustainability and economic performance of cotton in the Central High Plains has been awarded $750,000 as one of 12 national grants from the National Institute of Food and Agriculture.

The project is a four-year partnership between researchers at Oklahoma State University and Kansas State University. Together, they hope to identify the long-term environmental and economic viability of cotton production in areas where water scarcity requires the adoption of less water-intensive cropping systems.

Project leaders think that cotton is a potential alternative to traditional row crops, due to its low water requirements and promising net returns for farmers.

Jonathan Aguilar, a member of the research team and an extension specialist at K-State’s Southwest Research Extension Center, said portions of the project will take place in western Kansas, where uncertain rainfall and frequent drought make irrigation imperative for successful crop production. Water used for irrigation in this region comes from the Ogallala Aquifer, a resource that has seen troubling declines in water levels.

“Kansas is not alone in seeking answers to farmers’ questions as they start growing irrigated cotton further north of the historical cotton area, and that’s why Kansas State University and Oklahoma State University partnered in this research project,” Aguilar said.

As part of this research, specialists from both universities will work together to establish experiments aimed at optimizing cotton irrigation and production, as well as evaluate the impact of cotton production on soil health parameters in the region. They also hope to quantify the economic implications of cotton production in the central high plains on water resources like the Ogallala Aquifer.