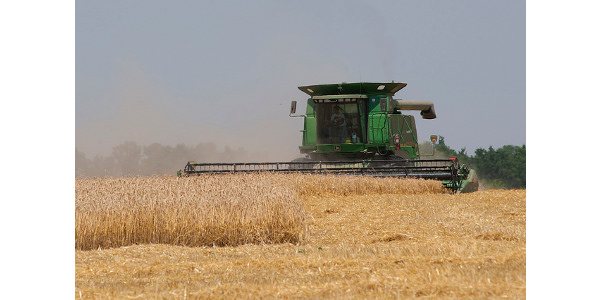 Every dollar invested in wheat research in Kansas returns $10 to the state's economy. America has the safest, most plentiful and most affordable food in the world, in large part due to agricultural research across the country. (Courtesy of K-State Research and Extension)

MANHATTAN, Kan. — For many families, it’s a pretty special time when the holiday ham is sliced, veggies are cooked and the rolls are golden brown. Kansas State University agricultural economist Andrew Barkley notes that consumers may not realize there’s probably a healthy helping of science on the holiday plate, as well.

Barkley, the Coffman Distinguished Teaching Scholar in the Department of Agricultural Economics, tracks the return on investment of agricultural research to local economies. What he often finds is that research leads to more efficient practices, which translates to less expensive food.

“For consumers, it means you’re getting a good deal on the food you eat,” Barkley said. “Agricultural research definitely has had a massive impact on lowering the cost of food over time, and it continues to lower the cost.”

In Kansas, scientists help farmers grow more abundant wheat and other crops, healthier pork and beef, and safer dairy products. As one example, Barkley has determined that for every dollar spent on wheat research in Kansas, the state’s economy gets a return of about $10.

In other states, land-grant universities – established more than 150 years ago to improve the lives of American citizens – use research to help with various parts of the traditional holiday meal, such as turkeys in Arkansas, cranberries in Massachusetts and potatoes in Idaho.

“All of the agricultural research (done at U.S. universities) is really geared toward making our production agriculture more efficient, which is really making those food products available for less money,” Barkley said. “That’s one way to explain efficiency.”

He noted that not too many years back, the cost of food took up most of a family’s budget. But today, “less than 10 percent of our budget is spent on food.”

“That 10 percent even includes all of our food away from home, including restaurants, and more expensive foods bought at specialty stores. If you make an effort to buy only affordable food, you could be well below 10 percent.”

Each year, the American Farm Bureau Federation studies the average cost of the Thanksgiving meal. In its unique study, the group sends shoppers out to purchase the products in a tradition holiday meal.

Last month, the group noted that the cost of dinner was down for the third consecutive year: about $48.90 for 10 people, or less than $5 per person.

Spending less on food leaves a bit more for other holiday expenses, says Barkley: “It gives us more money to spend in helping others or for buying gifts for our family.”

Barkley teaches a class at Kansas State University in which he tells students that when the United States was being settled, more than 90 percent of people were employed in jobs related to producing food.

“And now we’re down to just a few hundred thousand people, well below 1 percent of our population,” he said. “As a result of becoming more efficient in producing safe food, we are able to have people producing clothing and cars and cell phones and movies and footballs and running gear – all of that other stuff has become available, whereas a couple hundred years ago, all we had was food.”

“It’s all kind of tied together that the efficiency in agriculture allows people to produce other goods, and that increases our standard of living and that makes food more affordable. And not only is it more efficient and cheaper, but their incomes go up because they are doing other things.”

The U.S. Agency for International Development helps to spread this impact across the world. Through its global food and hunger initiative, called Feed the Future, USAID funds appropriately-named innovation labs at numerous universities.

Kansas State University has four such labs, the second most among U.S. universities, that address wheat and sorghum improvement, sustainable agriculture and post-harvest food loss.

“It’s fair to say that the rest of the world is catching up because of our efforts to transfer technology,” Barkley said. “So, really, the trend to produce safer, more plentiful and more affordable food is global and a lot of it is due to agriculturists at land-grant universities sharing their knowledge and expertise.”

Agriculture can do the job