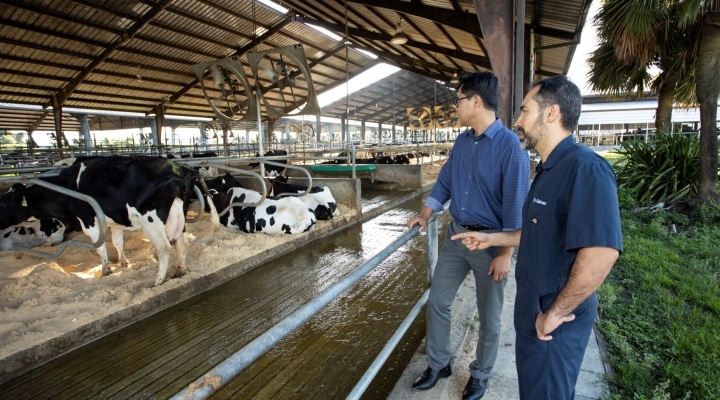 In their study, researchers uncovered links between genetic markers in beef cattle and the development of  health- and growth-promoting bacteria in an animal’s gastrointestinal tract.

The study was led by KC Jeong, an associate professor of microbiology in the department of animal sciences in UF’s Institute of Food and Agricultural Sciences and a faculty member of UF’s Emerging Pathogens Institute.

“We found host genes that are associated with several healthy gut bacteria,” Jeong says. “These could eventually become biomarkers for breeders to target so that we can produce cattle with better performance.”

Jeong has studied factors that affect disease-causing bacteria, such as which colonize food animals, but in his latest work, he seeks to understand connections between a host animal’s genetics and how naturally occurring communities of bacteria in the gut develop and change at different life stages.

The new study was published online in the ISME Journal on March 1.

The work has theoretical ties to people’s health. In recent years, connections between bacterial communities in the gut  — also called the gut microbiome — and overall human health have become clearer. People have 300 to 500 different kinds of bacteria living in their gut, and certain conditions are connected to having too many, or too few of these microbes.

Less is known about connections between the gut microbiome and animal health, however. And while it has long been assumed that animals such as cows acquire their gut bacteria through their environment or diet, newer evidence suggests that some of these bacteria may be inherited.

In the new study, researchers used a UF experimental cattle herd, which is composed of animals representing graduated ratios of breed composition from 100% Angus to 100% Brahman. Scientists used breed composition as a proxy for varying genetic composition of the host animals.

The research team found differences in the gut microbiome of the experimental herd of Angus and Brahman breeds, despite the study animals having identical environments and diets. These differences in the bacterial communities lasted from calfhood to adulthood. They also linked genetic markers in the cattle with specific bacterial types.

The team found that the association between the host animal’s genetics and its gut microbiome was strongest in young calfhood compared to all other life stages. The study found 83 core types of bacteria and estimated that a cow’s genetics accounted for 52.2% of the bacterial types in its young calfhood, 40.0% in late calfhood and 37.3% in adulthood.

The study also found many bacteria that are associated with weight gain throughout a cow’s life.

“If we can find host genetic markers associated with these bacteria that are in turn associated with weight gain, this too could be a breeding target, to select for animals that gain weight faster,” Jeong says.

Faster weight gain in cattle can influence meat quality and a rancher’s profitability.

At the heart of the study, the researchers discovered nine genetic markers in the cows that were associated with three types of gut bacteria: Oscillospira, Sutterella and Roseburia.

The association of these genetic markers and bacteria hold some intriguing hints about a host animal’s resistance against disease. Two of the three bacteria in this association are known to be connected with a reduction in inflammatory diseases in their hosts. And three of the nine genetic markers were associated with genes known to protect a cow’s gut by promoting anti-inflammatory responses. Taken together, Jeong’s team interprets this to mean they identified clear links between a host’s genetics and its gut microbiome.

Jeong’s future work will examine the interplay of a host’s genetics with beneficial and harmful gut bacteria. Given the challenges of eradicating disease-casuing bacteria from farmed animals and their environment, he envisions identifying healthy bacteria and host genetic factors that can be used to develop interventions to reduce harmful gut bacteria.

“You might think of it as a probiotic for cows,” Jeong says. “This would benefit human health too, by reducing the occurrence of pathogenic bacteria in our food animals.” 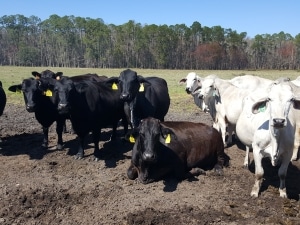