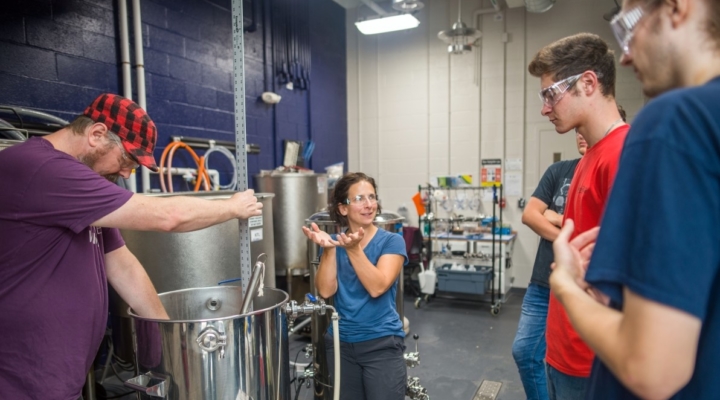 UNH students in the College of Life Sciences and Agriculture’s brewing science program brewed a new sour kiwiberry beer made of kiwiberries grown at the Woodman Horticultural Research Farm, a facility of the NH Agricultural Experiment Station. (Credit: UNH)

DURHAM, N.H. — As New Englanders prepare to gather with family and friends this week, their Thanksgiving table may be filled with an abundant supply of delicious, locally and regionally grown foods due to extensive agricultural research conducted by the NH Agricultural Experiment Station at the University of New Hampshire.

Love roasted Brussels sprouts at the holidays? Researchers have found that different varieties of the vegetable perform much better than others, and the practice of topping has the potential to increase marketable yields. “Brussels sprouts can easily be grown here, and the flavor of locally grown sprouts that have experienced some cold weather in the fall is sweeter than that of sprouts grown in warmer conditions. For those who love Brussels sprouts, knowledge of how to grow them here is a good thing. To my knowledge, this type of research hasn’t been done in this region before,” said experiment station researcher Becky Sideman, extension professor of sustainable horticulture production.

No Thanksgiving would be complete without winter squash and pumpkins. For five decades, continuous support from the NH Agricultural Experiment Station has allowed J. Brent Loy, emeritus professor of plant genetics, to undertake the longest continuous cucurbit breeding program in North America. As a result, New Englanders now enjoy some of the tastiest squash and pumpkins on the market today. Loy’s work, which has largely taken place at the experiment station’s Kingman and Woodman Research Farms, has resulted in more than 70 new varieties of squash, pumpkins, gourds, and melons sold in seed catalogs throughout the world, including several released this year.

Those with eggplant on the menu may be pleased to know that experiment station scientists have found certain eggplant varieties developed specifically for growing in greenhouses and high tunnels produced a prolific amount of fruit. That means more eggplant for Thanksgiving.

Historians believe that the first New England Thanksgiving included an abundance of seafood, given the region’s proximity to the ocean. However, 80 percent of the seafood eaten in the United States now is imported. To support sustainable agriculture in the Northeast, the experiment station opened an aquaponic greenhouse facility at the UNH Kingman Research Farm that aims to provide a model for integrating land-based aquaculture systems with hydroponic plant production. Scientists are raising tilapia, brown, trout and rainbow trout, which provide nutrients for growing lettuce. Sounds like a great addition to any meal.

Someday, kiwiberry wine and beer might become a staple for New Englanders because of UNH’s efforts to promote kiwiberries as a new, high-value crop in Northern New Hampshire. Plant breeder Iago Hale has established the nation’s first ever kiwiberry breeding research program at the Woodman Horticultural Research Farm. He is characterizing and evaluating the North American collection of kiwiberries, nearly 200 accessions, to identify promising varieties for the region and parent plants for new variety development.

How about adding some fresh, locally grown strawberries to your Thanksgiving? Experiment station scientists have quadrupled the length of the Granite State’s strawberry growing season. New Hampshire’s strawberry season traditionally lasts only four to six weeks. However, researchers picked day-neutral strawberries in Durham into November.

Many lovers of apple pie enjoy a hefty scoop of vanilla ice cream on the side. For consumers of Hood or Stonyfield vanilla ice cream (and those getting a head start on their egg nog,) they will be enjoying products made from some of the finest milk in the region. Hood sources some of its milk from the Fairchild Dairy Teaching and Research Center, and Stonyfield sources some of its organic milk from the Organic Dairy Research Farm. Both farms have been widely recognized as producing some of the highest quality milk in the nation.