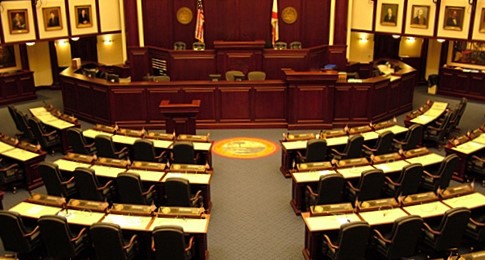 A half-dozen candidates for Florida's top law enforcement job and top consumer-services job pitched their candidacies at the Sunshine Summit at a resort near Orlando. (Mark Goebel, Flickr/Creative Commons)

KISSIMMEE, Fla. (AP) — Republican candidates for Florida attorney general promised to uphold the rule of law, while GOP candidates for agriculture commissioner bragged about their farming credentials at a conference for state Republicans on Friday.

A half-dozen candidates for Florida’s top law enforcement job and top consumer-services job pitched their candidacies at the Sunshine Summit at a resort near Orlando.

Both attorney general candidates defended Second Amendment rights, and neither mentioned recent shootings in Florida such as the massacres at a Parkland, Florida high school and a gay nightclub in Orlando. After the Parkland shooting, Florida Republican Gov. Rick Scott signed into law a bill that raises the minimum age for the purchase of long guns, extends the three-day waiting period for handguns to long guns and creates a program to enable some teachers or other school employees to carry guns.

“I will defend the Second Amendment. It is foundational,” said state Rep. Frank White, who promised to be an ally of President Trump. “It is the amendment that secures all our other rights.”

Former state judge Ashley Moody, also a former prosecutor, said she was the only GOP candidate in the attorney general race who has actually tried a criminal case. White is general counsel of an automotive company.

“I am the only candidate in this race who has upheld Stand Your Ground and the Second amendment in a court of law,” said Moody, referring to the Florida law which allows someone to use deadly force if they believe they are going to be harmed.

Caldwell said water policy is a key issue that the next commissioner will face.

“If we get it wrong, if we don’t pay attention to what’s important on this question, we end up like California,” Caldwell said.

The two leading GOP candidates for governor, Adam Putnam and Ron DeSantis, urged the Republicans not to be complacent about the election, a day after they had their first debate.

“We have to work for this every single day between now and Election Day,” Putnam said. “It’s going to be a team win!”