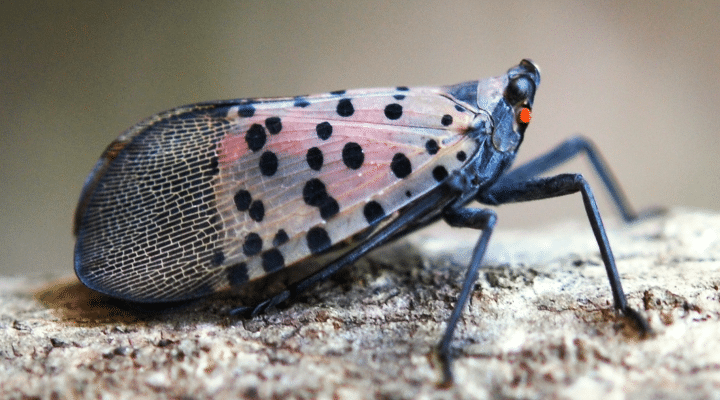 Spotted lanternfly attacks a variety of trees, shrubs, and vines, and has the potential to impact a broad range of agricultural commodities, including apples, peaches, grapes/wine, maple syrup, as well as the ornamental nursery industry. (Photo Credit: Lawrence Barringer, Pennsylvania Department of Agriculture)

Additionally, MDAR was recently notified that nursery stock with spotted lanternfly egg masses and adults may have been unintentionally imported and planted in several parts of Massachusetts.

MDAR is urging anyone who has received goods or materials, such as plants, landscaping materials, or outdoor furniture, from a state with a known SLF infestation to carefully check the materials, including any packaging, for signs of spotted lanternfly. Currently, there are known introductions of SLF in Connecticut, Delaware, Maryland, New Jersey, New York, Pennsylvania, Virginia, and West Virginia.

If any indication of SLF is found, residents should take a photo or collect the specimen, and report any potential sightings of the pest using MDAR’s online reporting form. Residents should look for large, gray insects, about one inch long, with black spots and red underwings, or inch-long, rectangular yellowish-brown egg masses covered with a gray waxy coating. Egg masses may be found on any flat surface.

“These most recent finds call attention to the fact that there are many ways that spotted lanternfly can travel here from other states,” said MDAR Commissioner John Lebeaux. “Early detection plays an important role in the protection of our state’s economic and ecological resources from invasive species, and we ask anyone who may have received shipments of wood, ornamental plants, or any other materials from Pennsylvania or other Northeastern states to help protect the natural resources and agricultural industries of Massachusetts by checking for and reporting any signs of spotted lanternfly.”

Spotted lanternfly (Lycorma delicatula, “SLF”) is an invasive sap-feeding insect from Asia that was first found in the United States in 2014, in the state of Pennsylvania. While the main host plant of this pest is tree-of-heaven (Ailanthus altissima), spotted lanternfly attacks a variety of trees, shrubs, and vines, and has the potential to impact a broad range of agricultural commodities, including apples, peaches, grapes/wine, maple syrup, as well as the ornamental nursery industry.

As many families across the Commonwealth spend more time at home during the COVID-19 pandemic, and are undertaking activities to improve their outdoor spaces such as gardening, Massachusetts has seen an increase in purchase of items such as outdoor furniture, play structures, gazebos, as well as trees and shrubs for landscaping. When shipped from areas with SLF infestations, these products, and the vehicles used for transportation, can unintentionally carry the pest into new areas.

Because no live lanternflies have yet been found in Massachusetts, there is currently no evidence that SLF has become established in the Commonwealth. As a precaution, surveys are planned in the areas where the insects were found, to confirm that no live populations are present. While a dead lanternfly was previously found in the Boston area, in December of 2018, repeated surveys have found no further signs of SLF in that part of the state.