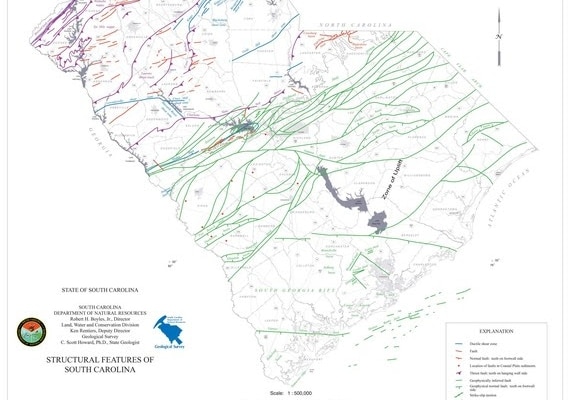 Some of South Carolina’s leading geologists have authored a report exploring the factors behind recent earthquakes in the Elgin area, an effort to help the public understand what is happening and why. (SCDNR)

COLUMBIA, S.C. — Some of South Carolina’s leading geologists have authored a report exploring the factors behind recent earthquakes in the Elgin area, an effort to help the public understand what is happening and why.

The geologists, from the S.C. Department of Natural Resources Geological Survey, the University of South Carolina and College of Charleston, sought to explain the concept of earthquake swarms, the numbers of earthquakes that have been experienced in the Elgin area during the past seven months, the difference between magnitude and intensity when measuring seismic events and why the earthquakes have been occurring so frequently along the Interstate 20 corridor between Elgin and Lugoff.

“The unusually long earthquake swarm in the Midlands area has understandably led to a lot of questions and speculation,” said State Geologist Scott Howard, with the S.C. Geological Survey under SCDNR. “We know that there is a lot we can explain about these seismic events and wanted to help answer a lot of those questions and limit confusion among the media and members of the public.”

Among the report’s takeaways:

The South Carolina Emergency Management Division encourages all residents to stay informed about and be prepared for earthquake activity in the state.

“Though the frequency of these minor earthquakes may alarm some, we do not expect a significantly damaging earthquake in South Carolina at this time, even though we know our state had them decades ago,” SCEMD Director Kim Stenson said. “Now is the time to review your insurance policies for earthquake coverage, secure any items in your home that may become hazards during a tremor, and remember to Drop, Cover, and Hold on until the shaking passes. These are the precautions South Carolinians can take to properly prepare for earthquakes.”