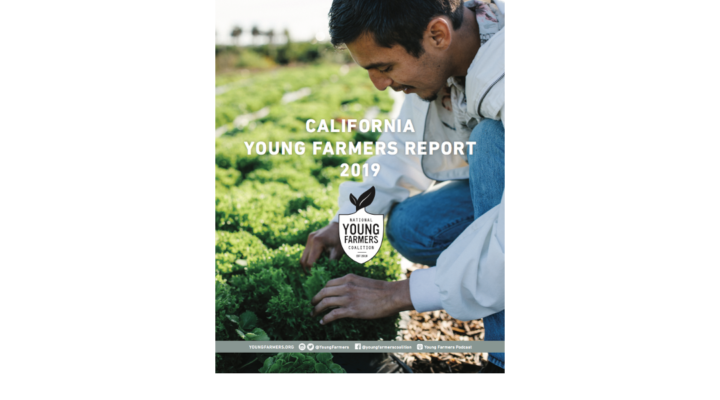 The National Young Farmers Coalition (Young Farmers) has released its 2019 California Young Farmers Report, a first-of-its-kind look at the state’s enterprising beginning farmers and ranchers, the challenges they face, and the policies and programs they need to ensure a successful, sustainable future for agriculture in California. (Courtesy Photo)

SACRAMENTO — California is the highest producing agricultural state in the U.S. by value. The state is also home to over 70,000 working farms, and more than one-third of U.S. vegetable and two-thirds of U.S. fruit and nut production.1 The importance of California’s agriculture and its farmers to the U.S. economy and food system cannot be overstated. Additionally, twenty-seven percent of primary producers in California are beginning farmers with less than 10 years of experience. The future of agriculture in the state, and the U.S. as a whole, depends on the success of California’s next generation of farmers and ranchers.

The National Young Farmers Coalition (Young Farmers) has released its 2019 California Young Farmers Report, a first-of-its-kind look at the state’s enterprising beginning farmers and ranchers, the challenges they face, and the policies and programs they need to ensure a successful, sustainable future for agriculture in California.

The report’s lead author and Young Farmers’ California Organizer, Mai Nguyen, said, “It’s very rare that we hear the whole story of what it’s like to be a farmer in California, and particularly for young farmers or farmers of color. I wanted to capture their experiences so that we have a fuller understanding of who’s feeding us, and what is needed to ensure they can continue growing food for our country successfully.”

The report pulls from a statewide survey of farmers as well as listening sessions in the San Joaquin Valley and San Diego County. The data collected help define the demographics, challenges, and policy and program needs of young farmers across the state. Top reported challenges included insufficient compensation, lack of affordable housing and land access, lack of water access, lack of health insurance, climate change, structural racism, lack of skilled labor, and lack of market access.

Alarmingly, the recently released 2017 Census of Agriculture shows that the average age of primary producers in California is 61.2 years. Moreover, producers over the age of 65 outnumber producers under the age of 35 by 10 to 1. This is a wake-up call to not only better understand the needs of California’s young farmers, but for supporters, advocates, and consumers to take decisive action.

The report also highlights the major structural challenges facing young farmers across the nation, and the way these challenges are increasing barriers to entry into agriculture. Extreme weather events, drought, and wildfire are compounding the risk of sustaining a successful farm business. This is not just about what’s happening in California, rather it intersects with many larger issues; climate change, racial equity, immigration, and the future of the U.S. food system and economy. This report is a roadmap for legislators, technical service providers, and partner organizations working to build a brighter, more sustainable future with California farmers.

“This is a state-specific report, but its findings resonate with what we’ve seen across the country,” said report co-author and Young Farmers Interim Director, Martin Lemos. “We see highly-skilled farmers and emerging farm businesses limited by a lack of access to farmland, credit, housing, labor, and healthcare. Our young farmers have so much potential, and states like California are invested in building strong agricultural economies. It’s critical that we increase and expand access to the resources young farmers need to support themselves and their communities through agriculture.”

The National Young Farmers Coalition (the Coalition) is a national advocacy network of young farmers fighting for the future of agriculture. Visit us on the web at youngfarmers.org, and on Twitter, Facebook, YouTube and Instagram.

New field of study on the horizon: Digital biology
September 13, 2021