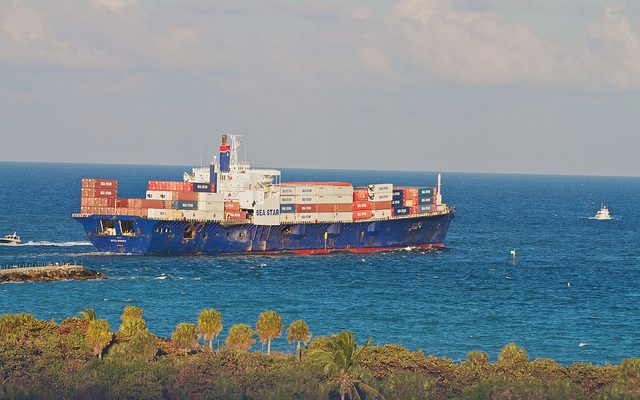 A new report by the Nebraska Farm Bureau details the strong connection between the threat of U.S. imposed tariffs on trade partners and the loss of hundreds of millions of dollars in Nebraska agriculture exports in 2017. (Michael Bentley via Flickr)

LINCOLN — A new report by the Nebraska Farm Bureau details the strong connection between the threat of U.S. imposed tariffs on trade partners and the loss of hundreds of millions of dollars in Nebraska agriculture exports in 2017. The “Nebraska Agriculture and International Trade” report uses the most current United States Department of Agriculture (USDA) trade data to identify the 2017 value of Nebraska agriculture exports on a per-commodity, per-county, and per-farm and ranch basis. In doing so, the report details the strong sensitivity of agriculture markets and Nebraska exports to negative trade and tariff talk.

“While retaliatory tariffs on U.S. agriculture commodities didn’t occur until President Trump imposed steel and aluminum tariffs on our trading partners in May of 2018, the President began threatening the use of tariffs in trade negotiations in January of 2017, an entire year earlier. This new report reviews 2017 numbers and provides an economic perspective on how harmful the threats of tariffs were to Nebraska agriculture exports well before the President enacted tariffs and agriculture began to suffer from other countries’ retaliatory measures,” said Jay Rempe, Nebraska Farm Bureau senior economist and author of the report.

“Nebraska agriculture exports were down almost $200 million in 2017 compared to 2016. Most of that decline was due to decreased exports of soybeans, which were down $130 million, and reduced corn exports, which fell more than $140 million. It’s no coincidence those declines coincide with U.S. tariff threats made against some of our largest trading partners like China, Mexico, and Canada. China is the largest consumer of Nebraska soybeans, while Mexico is the largest buyer of Nebraska corn and the third largest purchaser of soybeans. Canada is Nebraska’s top overall agriculture export market,” said Rempe. “The tariff threats clearly impacted those markets for Nebraska agriculture commodities.

“The boost in beef and pork exports was good for Nebraska and needed to help offset overall declines in corn and soybean exports. Fortunately, Japan, which is far and away the largest buyer of Nebraska beef, and the largest purchaser of Nebraska pork, was never targeted for tariffs. Our beef and pork producers escaped the negative market impacts of tariff threats in 2017,” said Rempe.

The report also analyzes and puts a dollar value of agricultural trade for every Nebraska county. Cuming County edged out Platte County as the county receiving the most value from agriculture trade in 2017. More than $155 million of export value flowed to Cuming County due to international sales, while $149 million flowed to Platte County, which held the top spot in the 2016 report.

“This report shows that we can’t understate the importance of agricultural trade to Nebraska, but it also reflects the sensitivity of agriculture markets to negative talk surrounding trade policy. Between the blizzard and flooding disasters that have hammered our state, and the overall downward trajectory of the agriculture economy, farmers and ranchers are in desperate need of a ‘win’ on trade. Nebraska Farm Bureau is committed to working with the Administration and Congress to pass the U.S.-Mexico-Canada Agreement (USMCA) and we need the President to deliver on his promise to secure trade deals with both Japan and China,” said Steve Nelson, Nebraska Farm Bureau president.

The “Nebraska Agriculture and International Trade” report is available on the Nebraska Farm Bureau website at www.nefb.org.