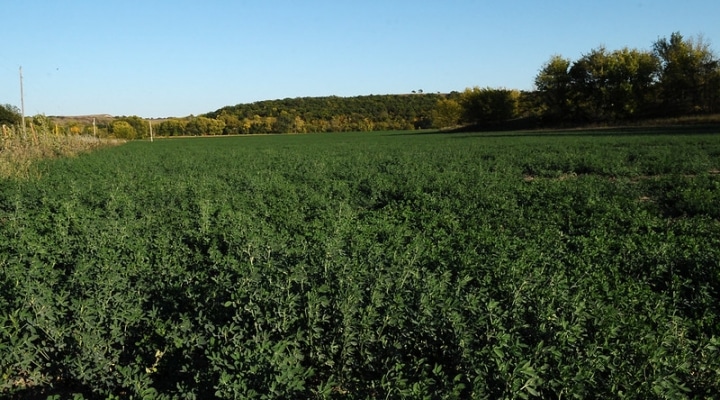 Crop rotation can be can be a beneficial way to replace a declining alfalfa field. (K-State Research and Extension via Flickr/Creative Commons)

NORTH PLATTE, Neb. — Planting new fields of alfalfa is expensive.  So many of us put off tearing up old fields and planting new ones.  But is this smart?

Alfalfa stands usually reach peak production by year two or three.  After this, yields tend to decline each year.  By year four or five, yields are often much lower than their peak years, especially for dryland fields, because the subsurface moisture that plants were using during the early years is all gone.  This is most noticeable during drought years when regrowth is almost zero after the first or second cut. Yield decline in irrigated fields is slower but usually is a ton or more lower by year five or six.  In addition, thin stands with densities of less than 50 stems per square foot can open the door for weed encroachment.

So, should you try to squeeze another year out of your alfalfa stand? Calculate the costs. First, and most obvious, how will the lower yield of your old field compare to yields from a younger field.  A second loss, is the lost rotation benefit received by crops like corn that follow alfalfa in the rotation.  Not only will alfalfa reduce your nitrogen fertilizer needs by one hundred to one hundred fifty pounds over the next couple years, much research has shown that corn after alfalfa often yields ten to twenty bushels more per acre than it will even with extra fertilizer.

This rotation benefit could be especially valuable this year if corn prices stay high.  So, if you have alfalfa fields that are past their prime, or maybe show winter damage this spring, this might be an excellent time to rotate those fields to a different crop and plant some new, higher yielding acres to alfalfa. Both your alfalfa crop and the rotated crop could benefit.