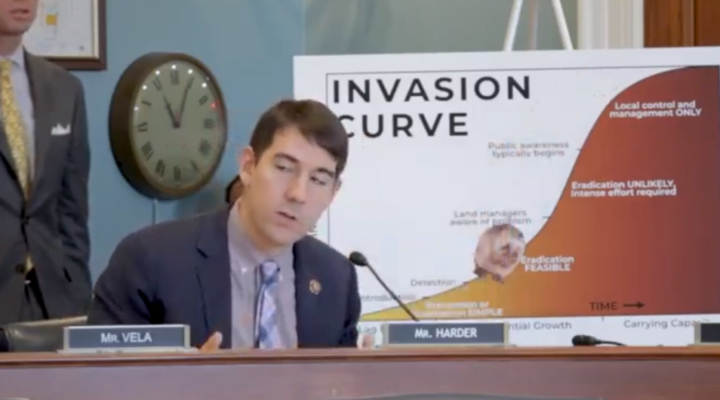 WASHINGTON — Representative Josh Harder (CA-10) is educating his colleagues on the House Agriculture Committee on the devastating threat posed by swamp rats to Valley agriculture, environment, and infrastructure as the rest of the Washington establishment focuses on impeachment. During a hearing in the Livestock and Foreign Agriculture Subcommittee, Rep. Harder visually illustrated the exponential growth rate and cost of inaction in regard to the nutria – and compared it to another invasive species – the feral hog in the American South.

“We need Washington to listen to the needs of Valley farmers – and that means giving us some support in the fight against the nutria,” said Rep. Harder. “We’re spending $75 million over five years to fight feral hogs in the South – and we could’ve spent a fraction of that had we acted earlier. We don’t want to make that same mistake with nutria in California.”

Rep. Harder is the national leader in efforts to stop the nutria. He has introduced legislation to reauthorize the Nutria Eradication and Control Act of 2003 and direct $7 million in funding towards management of the species in California. In September, Rep. Harder brought “Nellie” a taxidermy nutria to a hearing in another committee to encourage support for his bill. Rep. Harder has also called on the administration to halt its plan to disband the National Invasive Species Council, which is responsible for unifying all federal efforts to combat invasive species.

Without intervention, it’s estimated that there could be up to 250,000 Nutria in California within five years. Nutria can devour up to 25 percent of their body weight daily and have up to 200 offspring per year.

–The Office of Representative Josh Harder