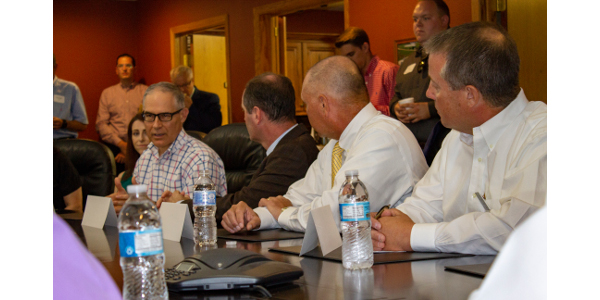 Renew Kansas board member and President/CEO of East Kansas Agri-Energy, Bill Pracht, provided a tour of the facility’s ethanol and renewable diesel operations before turning the event over to a lively standing-room-only conversation on the Renewable Fuel Standard (RFS).

“We thank Administrator Pruitt for coming to Kansas and listening to our concerns and current challenges,” Renew Kansas Chairman and Western Plains Energy CEO Derek Peine, said. “His commitment to year-round E15 sales and reallocation of refinery waivers to the RFS obligations to account for lost demand is appreciated; but until action and results are seen, there’s still a lot of work to be done. Kansas agriculture will be watching to make sure Pruitt lives up to the commitments he made today and that he follows through on the repeated commitments President Trump has made to renewable fuels.”

Corn growers and ethanol supporters explained the problems EPA has caused by decreasing demand for ethanol. Pruitt explained he had to grant the small refinery exemptions because of a recent court ruling allowing refiners to only show financial hardship, but did not articulate how financial hardship was defined.

Renew Kansas President and CEO Ron Seeber noted, “Administrator Pruitt learned, without a doubt, that the industry is frustrated. We hope this is a wakeup call to the administration that the farm belt is watching and seeking unbiased biofuel leadership.”

Pruitt thanked each person in attendance and said he supported an RVP waiver that would allow year-round E15 sales and believes EPA has the authority to grant it, eventually. Pruitt also thought the gallons in the refinery waivers should be reallocated to the RFS obligations to account for lost demand.

Under Administrator Pruitt’s guidance, EPA has granted 1.6 billion gallons in waivers, with an estimated economic impact of $5.3 billion in lost markets for ethanol, corn and RINs. A RIN is assigned to every gallon of ethanol blended to prove compliance with the RFS law which provides market access for ethanol.