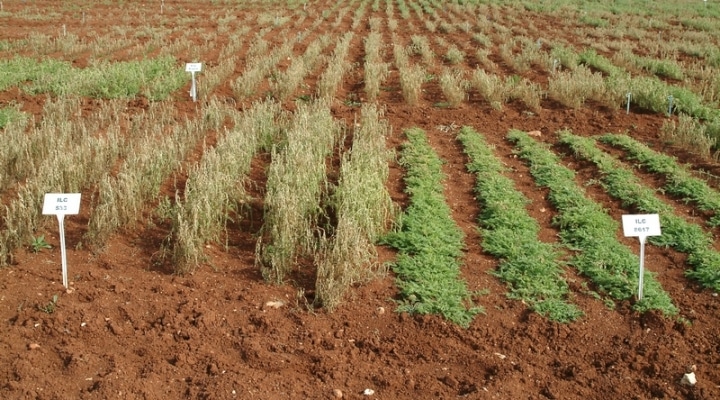 Carl Taber knelt down at the edge of a field on his 500-acre farm, took a wrench to his planting machine, and did something he had done only a few times before. He calibrated the equipment to plant chickpeas – a crop rarely grown in upstate New York. (photo by ICARDA - Science for Resilient Livelihoods in Dry, creative commons/flickr.com)

ITHACA, N.Y. — Carl Taber knelt down at the edge of a field on his 500-acre farm, took a wrench to his planting machine, and did something he had done only a few times before. He calibrated the equipment to plant chickpeas – a crop rarely grown in upstate New York.

“I’m pretty excited about the potential for a new crop,” says Taber, who planted 1,000 pounds of chickpeas in May on a 5-acre test plot on his farm in Mecklenburg, in Schuyler County, New York, about 30 minutes west of Ithaca. “Just because it hasn’t been tried here doesn’t mean it won’t work here.”

Taber is part of a Schuyler County-Cornell partnership to learn if chickpeas can be grown in New York state. If it works, the pilot project could offer New York farmers a way to diversify their crops – and rev the region’s economic engine, giving Finger Lakes food manufacturers a more cost-effective, sustainable source for chickpeas.

“The market is there,” Taber says. “We have local companies looking for product, and they really would like to have something that they could put a ‘locally grown’ label on.”

The pilot project was inspired by Antithesis Foods, a Cornell-student startup that makes Grabanzos, a crunchy chocolate covered snack made with chickpeas.

“We were giving Judy a presentation on the company,” says Yoon, “and when we showed her a map of our supply chain – where we source and process our ingredients – she was surprised and said ‘You get your chickpeas from Arizona? Why aren’t they being grown here?’”

Susceptible to blight, chickpeas have long been associated with the drier climates of Africa, India and the Middle East, where they have been grown successfully for centuries. In the U.S., most chickpeas are grown in California and the Pacific Northwest, then dehydrated and shipped East, where they are rehydrated by manufacturers. But there is evidence that certain varietals could flourish on the East Coast.

And demand is growing. According to U.S. Department of Agriculture, retail sales of foods based on legumes like chickpeas, lentils and beans increased from less than $10 million in the 1990s to $700 to $800 million in recent years. According to Entrepreneur magazine, the U.S. hummus market is expected to top $1 billion in the next five years.

Asking her connections in the region’s agricultural community, McKinney-Cherry could not find anyone growing chickpeas in New York state. But she was undeterred.

“New York state was founded on innovation – that’s what put us on the map, so what better way to go back to our roots than attempting to diversify our state’s agriculture?” says McKinney-Cherry, who quickly assembled a team of regional investors, businesses, researchers and farmers to explore the possibility of locally grown garbanzos.

In 2020, the initiative enlisted Taber, chair of the Schuyler County Industrial Development Agency, to establish a 3-acre test plot of three varieties of Kabuli chickpeas.

Looking for assistance from horticulture experts, McKinney-Cherry reached out to Laurie DeNardo, associate director of CALS’ Office of Human Resources. DeNardo referred McKinney-Cherry to Alan Taylor, professor of seed science and technology in the School of Integrative Plant Science, Horticulture Section, at Cornell AgriTech. Taylor’s lab has led extensive research on seed treatments over the past three decades with chemical and biological methods to protect seeds and seedlings from insects and diseases. “I was more than glad to help with seed treatments to get this new crop off to a good start,” Taylor says.

With Taylor’s assistance, the group acquired a fungicide seed treatment from a commercial supplier and had it applied to the seeds on campus with the help of Phil Atkins, director of the New York Seed Improvement Project in the School of Integrative Plant Science. The initiative also sought guidance from CCE-Schuyler County.

Despite a late planting, the 2020 test plot yielded encouraging results – one varietal was still growing robustly into late fall despite snowfall – and offered important lessons.

“We learned the crop can be grown in our climate,” Taber says. “We learned that there is demand and a potential market in our region. We identified a source for seed – an accomplishment in itself. To demonstrate commercial viability of the crop, there will need to be an investment in processing in this region.

“However,” he says, “it could result in economic opportunity beyond the benefit to the farmer. I also think there is potential for this to be another crop to diversify rotations that might currently rely on spring cereals, and with the soil health and fertility benefit of a legume.”

The harvest was dried locally. Then Goodman and Yoon tested a batch of the strongest varietals to see if they measured up to chickpeas trucked into the state – and successfully recreated the texture of their product.

“There are a lot of great reasons to grow chickpeas in New York State. We have a national brand here – Ithaca Hummus – that could potentially source chickpeas locally instead of having them trucked across the country,” says Goodman. “We have farmers in the region who are looking to diversify their crops. More people are eating chickpeas in the United States and many of those people live here on the East Coast. Growing chickpeas here would be a competitive advantage.”

Now the initiative is continuing the experiment, with Taber’s 5-acre test plot, where Taber planted Frontier, Orion and chana varieties.

“It has been rewarding to work with innovative and entrepreneurial-minded partners across the region on this effort,” McKinney-Cherry says. “Having the support of the private sector, local citizens, Cornell Cooperative Extension, Cornell and elected officials, all pulling in the same direction to make this happen, is truly exceptional.”