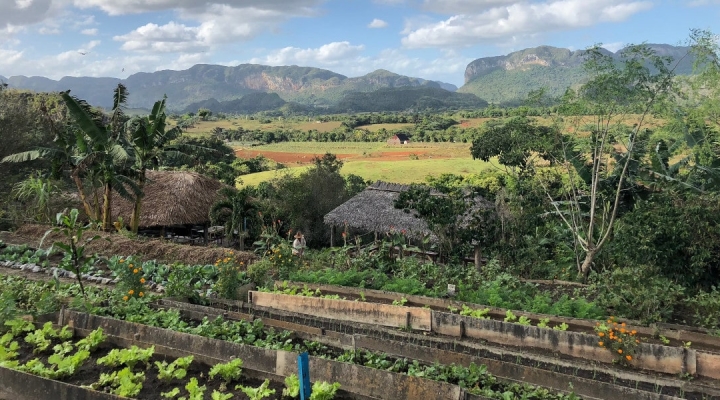 Cuba's socialist government last year approved a package of 63 reforms meant to make it easier and more profitable for producers to get food to consumers — measures such as allowing farmers greater freedom to choose their crops and letting them sell more freely, at higher prices. (Alexander C. Kafka, Flickr/Creative Commons)

HAVANA (AP) — First, it was impossible to find fuel or seeds to plant. Later his name wasn’t on a list of farmers eligible to rent tractors from the state. Now Lázaro Sánchez fears the current tropical rainy season will hinder his ability to work the land.

While Sánchez worries about trying to grow crops at his farm on the outskirts of Havana, Cubans in the cities are struggling with shortages of food and soaring prices.

To address such problems, Cuba’s socialist government last year approved a package of 63 reforms meant to make it easier and more profitable for producers to get food to consumers — measures such as allowing farmers greater freedom to choose their crops and letting them sell more freely, at higher prices.

They are the latest in a series of highly touted changes adopted over the past 30 years since the collapse of the Soviet Bloc stripped Cuba of its most important sources of aid and trade. Officials have eroded the dominance of state farms and encouraged more semi-independent cooperatives. They have given farmers greater land use rights and loosened restrictions on sales..

But none of those efforts has yet been able to solve the island’s chronic agricultural woes.

Sánchez, for example, can now sell most of the vegetables he produces himself instead of being forced to sell them to the state at fixed prices, though it still takes a reduced share. He could even set up his own roadside stand if he chooses. His power and water bills have been cut.

But farmers say the measures are still not sufficient to overcome obstacles. While government prices for some supplies such as local herbicides, fertilizers, wire and tools were cut, many inputs remain hard to get. The state is trying to overcome a lack of resources needed to import them.

The shortage of fruits in a tropical nation and of pork that is basic to the Cuban diet has become even more dire due to hardships caused by a pandemic that choked off the revenue-producing tourism industry — and by economic sanctions tightened under former U.S. President Donald Trump.

And Sánchez said the problems he encountered mean his own farm won’t do much to solve the problem this season.

“Sadly, we are going to be affected in three or four months. The food we had to be planting we’re not going to have,” Sánchez told The Associated Press.

The 56-year-old Sánchez and his brother work a 26-hectare (64-acre) farm that usually produces crops such as squash, corn, bananas, small animals and the tuber called malanga that is widely eaten in Cuba.

The island spends about $2 billion a year of its scarce foreign currency importing foods — though authorities say about $800 million of that could be produced at home under the right conditions.

Cuba’s National Statistics and census Office reported production of 2.1 million tons of tubers — such as potatoes and malanga — last year, about the same as in 2020 but short of the 2.8 million produced in 2017.

Cuba’s farms produced 1.7 million tons of vegetables — down from 2.4 million in 2017. Output of rice, corn, beans and citrus also has been stagnant or declining, as has that of milk, pork and beef.

And that has slammed Cubans in the pocketbook at a time when many other prices are rising as well.

Still, authorities defend the reforms, saying that without them, things would have been even worse.

“The 63 measures have had a favorable impact,” said Armando Miralles, the Agriculture Ministry’s director of organization and information. He said it was an achievement to avoid even sharper losses, given the economic woes.

Outside experts, however, say other factors are to blame as well.

“Before the 90s, Cuba had all the resources (supplied by Soviet Bloc allies) and the results were bad,” said Ricardo Torres, a Cuban economist at the Center for Latin American Studies at American University in Washington.

He said problems include overly centralized administration and state ownership of most land — something imposed in years soon after the 1959 revolution, which nationalized big foreign owned farms and later smaller local ones. Most farmers have rights only to use the land they farm, not to own it, which outside experts say limits their incentive to invest in it.

Cuban officials say most potential farmland remains uncultivated despite a series of efforts to encourage people to leave the cities and take up the plow.

“When they launched the 63 measures, in that moment it was an achievement,” said Misael Ponce, who has 120 hectares (297 acres) dedicated to ranching in addition to a small plant producing cheese and yoghurt he sells to hotels — a business allowed under the new measures.

But he said the new income has been eaten by inflation. While the state tripled the price of milk, the cost of inputs rose by eight times, he said. “It is something that has to be reviewed very quickly,” he said.