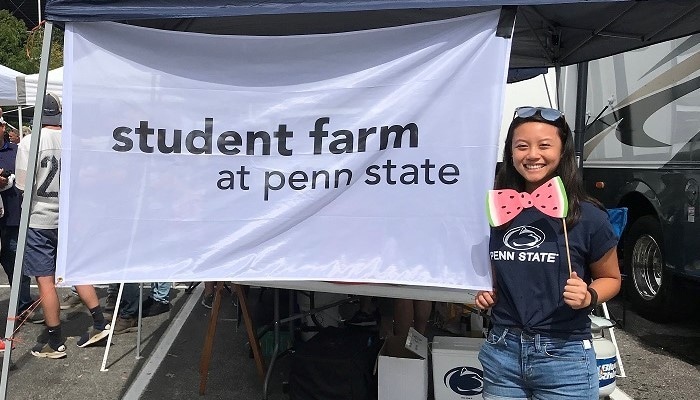 Jessica Chou, a senior majoring in Environmental Resource Management, has been an active member of the Student Farm Club since she was a freshman. (IMAGE: JESSICA CHOU)

“In the first semester of my freshman year at Penn State, my friend asked if I wanted to go to a club meeting with her,” Chou, now a senior, said. “It turned out to be the Student Farm Club. And I just kind of stuck around.”

Chou, an environmental resource management major in Penn State’s College of Agricultural Sciences, wasted no time in getting involved. By the spring semester of her freshman year, she was working as a paid production intern at the Student Farm. She then served as the club’s engagement director before being elected to her current position as its executive director.

She said what initially attracted her to the club was its community aspect and learning about the food system.

“For me, growing up in a suburban area surrounded by farms, I really never learned much about them. And I realized that I didn’t know much about how food was produced,” she said. “Being in the club has taught me about all the different pieces of issues.”

In her time with the Student Farm Club, Chou, in conjunction with fellow executive team member Katie Leite, has planned the past two iterations of its annual Harvest Festival, attracting more than 400 attendees each year. In addition, she has spearheaded the organization’s involvement in miscellaneous events and educational opportunities for other students, including documentary screenings and discussions.

Chou spoke at Penn State’s Student Engagement Summit in fall 2019, an event aimed at sharing, showcasing and engaging student learning. She also has been recognized by faculty members and advisers.

“Jessica has been a wonderful student, friend and colleague over the past four years,” said Leslie Pillen, associate director of farm and food systems and adviser to the club. “She brings a thoughtful attitude to her work, and it is very clear that she is passionate about food systems, agriculture and sustainability. She is a great mentor and role model for other students.”

Chou has involved herself elsewhere at Penn State. In her coursework, which includes minors in environmental and renewable resource economics and in entrepreneurship and innovation, Chou has followed her interest in making businesses more sustainable.

“Companies basically run the world,” she said. “They’re everywhere, and changing the way that they produce or consume things — or use resources and pollute — can really save the environment.”

Chou has experience in the field of urban sustainability, having completed a summer internship in Philadelphia through Penn State Extension and a semester-long, study-abroad program in Copenhagen, Denmark. She currently is considering work in the field after her graduation.

“The big trend is that more people have been moving to cities for a while,” she said. “And I’m very interested in learning about how cities can be more environmentally sustainable.”

When asked how she would advertise the Student Farm Club to prospective students, Chou highlighted its wide diversity of projects, which include youth education, cooking, nutrition, hydroponics and greenhouse work.

“Basically, you have the freedom to start anything that you want to,” Chou said. “It’s a really great group of people who are all just really passionate about doing stuff in the world, and it’s also a great way to make the food that you eat more sustainable and environmentally friendly.”

She also emphasized the importance of the Student Farm Club in cultivating individual action.

“It’s difficult to think about problems such as climate change or feeding the world’s population” said Chou. “This (club) kind of brings it back down to the local level. You can see the food that you’re growing and the potential impact of your actions. I think that kind of interaction can influence people’s perspectives and knowledge about environmental issues.”

Chou participates in Penn State’s Music Service Club, for which she plays the violin, and dances in the Volé Penn State Dance Company. But, when thinking back on her favorite memory of Penn State, Chou reminisced on her first encounter with the Student Farm Club.

“It changed my future,” she said.

Hemp ‘goes hot’ due to genetics, not growing conditions