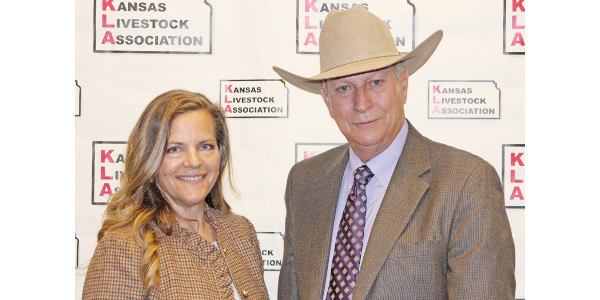 Reeve is a principal in his family’s integrated agribusiness that includes Reeve Cattle Company, Reeve Agri Energy and irrigated farming interests. Reeve Cattle Company is a 46,000 head feedyard started by his father, Jack, in 1962. The Reeve Agri Energy ethanol facility was co-located next to the feedyard in 1982, with distillers’ grains from the plant used as feed for the cattle.
Reeve represents the sixth generation of his family in the cattle business and the second generation to have served as a KLA officer. His father was KLA president in 1975.

His involvement in industry organizations has been extensive. Reeve is on the KLA Executive Committee. He is a past chair of both the KLA Cattle Feeders Council and KLA Water Committee. Reeve is a past participant in the KLA Leadership Conference and previously served as Finney County KLA director. He represents Kansas on the National Cattlemen’s Beef Association (NCBA) Board of Directors and is a member of the NCBA Ag Policy Committee.

Reeve has been a director for the Garden City Chamber of Commerce, Beef Empire Days, Commerce Bank of Garden City and Farm Credit of Southwest Kansas. He was a gubernatorial appointment to the Agriculture Value-Added Processing Leadership Council. U.S. Ag Secretary Ed Madigan appointed him to the Alternative Research and Commercialization Board in 1992.
He is a past recipient of the Kansas State Board of Agriculture’s “Innovator of the Year” Award. The Livestock and Meat Industry Council at Kansas State University named Reeve and his father as “Stockmen of the Year” in 2000.

Reeve graduated from K-State with a degree in agricultural economics. He received the Distinguished Agricultural Economics Alumnus Award in 1996.

He and his wife, Brenda, have three grown children, all of whom are K-State graduates. Kelley Deines lives at Garden City. Justin Reeve works for Reeve Cattle Company. Darcy Reeve is a recent K-State graduate.

Downey represents the fourth generation of her family in the ranching business. She and her late father, Joe Downey, started Downey Ranch in 1986. Downey and her husband, Joe Carpenter, operate the ranch, which consists of a registered Angus and commercial Angus-based cowherd that grazes pastures in Wabaunsee and Riley counties. The cattle are marketed as seedstock through a joint annual production sale with Kniebel Cattle Company of White City or finished and sold through U.S. Premium Beef, of which they are founding stockholders and qualified seedstock suppliers.

She has been extensively involved in leadership with both KLA and NCBA. Downey is a past chair of the Kansas Beef Council and currently is vice president of the NCBA Region VII Federation Division. Downey represents the Federation of State Beef Councils on the NCBA Executive Committee. She is a past chair of the KLA Natural Resources Committee, is a member of the KLA Stockgrowers Council and has served on the KLA Policy & Resolutions Committee. Downey is a past president of the Kansas Angus Association.

She has served on the USD 320 Board of Education. Downey is a past Wabaunsee County Extension Council member and a local 4-H club leader.

Downey graduated from K-State in 1986 with a degree in animal sciences & industry (AS&I). She and husband Joe, also a K-State AS&I graduate, received the K-State Block & Bridle Outstanding Stockmen Award in 2011.

The Carpenters have two daughters. Anna is a sophomore at Northeastern Oklahoma A&M. Laura is a senior at Wamego High School. Both girls work on the ranch during their free time.

KLA is a 5,400-member trade organization representing the state’s livestock business on legislative, regulatory and industry issues at both the state and federal levels. The association’s work is funded through voluntary dues dollars paid by its members.