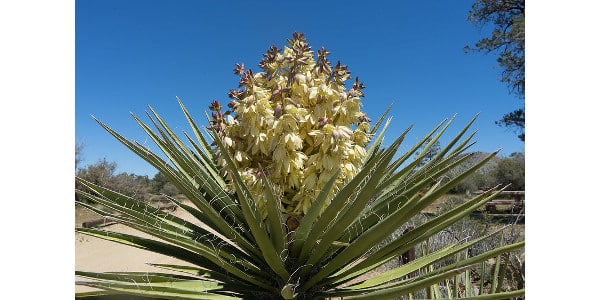 Yucca plants, which are also called soapweed, can be quite common on rangeland in western and central Nebraska. (Forest service photo by Tania C. Parra via Flickr)

NORTH PLATTE, Neb. — Yucca plants, which are also called soapweed, can be quite common on rangeland in western and central Nebraska. In some areas, they can be quite thick and significantly reduce grass production. There are ways, though, to reclaim those grazinglands.

Once established, yucca plants can increase on drier rangeland sites. They produce a deep taproot that competes aggressively for the limited water in these soils.  With sharp leaves protecting the plant, cattle rarely eat it during summer.

Herbicides like Remedy, Tordon, Velpar, or Cimarron Plus can control yucca, but only when each individual plant is sprayed directly.  General broadcast spraying to control yucca on rangeland is cost prohibitive, although small patches can and should be controlled before they expand.  Herbicides are most effective when applied in spring or summer.

When yucca covers too much land to spray, the only cost effective way to reduce its impact is to winter graze. During winter, yucca often is the only green plant around.  Sometimes cows actually will get down on their knees, lay their head sideways on the ground, and chew through the base of the plant to get to the moist, tender parts.  It has been observed though, that it can take some time for animals to learn to graze yucca and there may be some animals in the herd that will not graze it while others can be quite proficient.  After several consecutive winters of grazing, yucca stands can be reduced so grass again thrives during summer.

Now that summer range is going dormant for the winter, grazing will do little harm to your grasses.  This might be a good year to reclaim some of your rangeland back from yucca.  Winter grazing is your best tool.