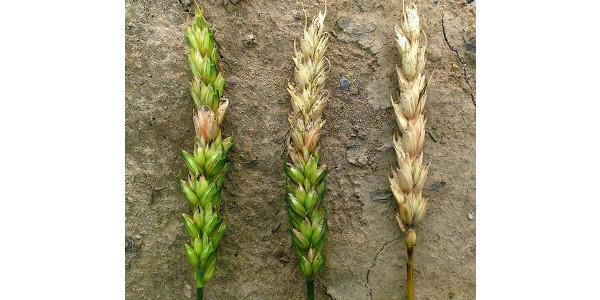 EAST LANSING, Mich. — Some high levels of Fusarium head scab are currently being found in Michigan wheat fields. Head scab is particularly high in areas that received adequate or excessive rainfall during the past month. This includes many fields in parts of central, southern and western Michigan. Relatively little evidence of scab has been found in the excessively dry areas of the state including the Saginaw Valley and Thumb regions.

While Fusarium head scab can lead to some yield reduction, the greatest financial losses come from price discounts imposed on infected grain that contains a toxic by-products of the fungus referred to as DON (or Vomitoxin). Generally, soft white and soft red wheat are discounted when DON levels exceed 1 ppm and 2 ppm, respectively.

Fields at greatest risk to disease and discounts are those that have varieties possessing little resistance to the disease and where a preventative fungicide was not used at flowering. However, as is the case in some fields this year, weather favorable to the disease easily trumps best management practices.

The main symptom of Fusarium infected heads is bleached glumes on part or all of the grain head. This is most easily seen just as the field begins to turn or when the kernels are in the late milk or early dough stage. Sometime, pinkish-orange fungal growth can also be seen. It may be reasonable to suggest that the disease is relatively severe where there is one or more scabby head per foot of row. Where there is less than one infected head in ten feet of row, there may be little accumulation of DON. However, it is not possible to arrive at a reliable estimate of DON levels based on the number of scabby heads as the disease and toxin levels can sometime progress until the grain is dried.

Inspecting harvested grain can also be an indication of the severity of scab. Fusarium-damaged kernels will often be shrunken and discolored (see illustration below).  Occasionally, kernels that appear healthy may also contain Fusarium and potentially DON, particularly when infection occurs late in the maturation process. Where scab is prevalent and high DON levels are anticipated, there are several measures a grower can take at harvest time. The most important are those directed at reducing the amount of chaff and shrunken, scabby kernels from the load.