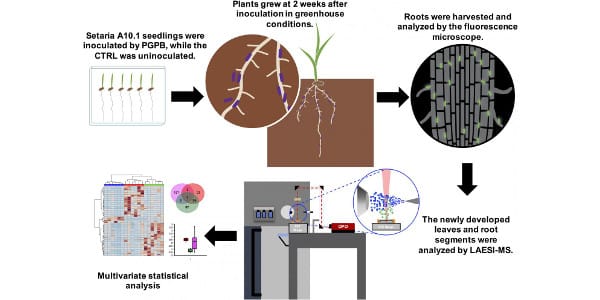 Three-day-old seedlings of Setaria viridis A10.1 were inoculated with either Herbaspirillum seropedicae SmR1 (fix+) or SmR54 (fix?), while the control (CTRL) plants were uninoculated. The plants grew for 2 weeks after inoculation under greenhouse conditions. The roots and leaves were harvested. Roots from plants that were inoculated with SmR1 or SmR54 were analyzed by fluorescence microscopy. (Courtesy of American Phytopathological Society)

ST. PAUL — Crop yields have increased substantially over the past decades, occurring alongside the increasing use of nitrogen fertilizer. While nitrogen fertilizer benefits crop growth, it has negative effects on the environment and climate, as it requires a great amount of energy to produce. Many scientists are seeking ways to develop more sustainable practices that maintain high crop yields with reduced inputs.

“A more sustainable way to provide nitrogen to crops would be through the use of biological nitrogen fixation, a practice well developed for leguminous crops,” says plant pathologist Gary Stacey of the University of Missouri. “A variety of nitrogen fixing bacteria are common in the rhizosphere of most plants. However, such plant growth promoting bacteria (PGPB) have seen only limited use as inoculants in agriculture.”

Stacey and his college believe that this limited use is due to the general problems associated with the use of biologicals for crop production and variable efficacy upon application. They conducted research to gain a greater understanding of the metabolic response of the plant host in order to reduce the variability seen with the response of crops to PGPB.

“One challenge with our research is that, while PGPB can colonize roots to high levels, the sites of colonization can be highly localized,” said Stacey. “Hence, isolating whole roots results in a considerable dilution of any signal due to the great majority of the root cells not in contact with the bacteria.”

To overcome this challenge, Stacey and his team utilized laser ablation electrospray ionization mass spectrometry (LAESI-MS), which allowed them to sample only those sites infected by the bacteria, which they could localized due to expression of green fluorescent protein.

Their results showed that bacterial colonization results in significant shifts in plant metabolism, with some metabolites more significantly abundant in inoculated plants and others, including metabolites indicative of nitrogen, were reduced in roots uninoculated or inoculated with a bacterial strain unable to fix nitrogen.

“Interestingly, compounds, involved in indole-alkaloid biosynthesis were more abundant in the roots colonized by the fix- strain, perhaps reflecting a plant defense response,” said Stacey. “Ultimately, through such research, we hope to define the molecular mechanisms by which PGPB stimulate plant growth so as to devise effective and consistent inoculation protocols to improve crop performance.”

Stacey’s lab has long been interested in biological nitrogen fixation and plant-microbe interactions in general. Since the discovery of biological nitrogen fixation (BNF), the lab has had a goal to convey the benefits of BNF to non-leguminous crops such as maize. PGPB have this ability in nature but this has not been adequately captured for practical agricultural production.

“We believe that, in contrast to other better studied interactions, such as rhizobium-legume, this is due to a general lack of information about the molecular mechanisms by which PGPB stimulate plant growth. Hence, we have undertaken in our lab projects that seek to provide this information in the belief that such information will increase the efficacy of PGPG inoculants with the net effect to increase their use for crop production.”

Stacey and his team were most surprised to find that they did not see a significant impact on phytohormone production that correlated tightly with the ability of PGPB to enhance plant growth. This suggests that PGPB impact plant metabolism to a greater extent than previously realized, pointing perhaps to more complex explanations for how these bacteria impact plant growth.

Farmers, grain companies step up to help out

Copper boosts pig growth, and now we know why