Home / National / Reducing phosphorus runoff
A new user experience is coming! We'll be asking you to login to your Morning Ag Clips account March 1st to access these new features.
We can't wait to share them with you! Read more here. 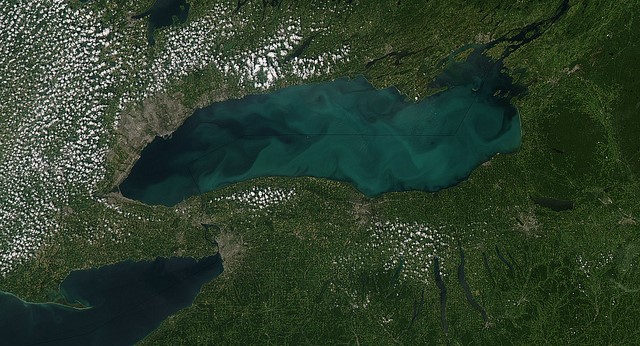 NEWARK, Del. — Throughout the United States, toxic algal blooms are wreaking havoc on bodies of water, causing pollution and having harmful effects on people, fish and marine mammals.

One of the main contributors to these algal blooms is excess phosphorus that runs off from agricultural fields and while there has been a lot of efforts in recent years by farmers to improve agricultural management, the problem persists and there is still a lot of work to be done.

In a paper published recently in the Journal of Soil and Water Conservation, the University of Delaware’s Leah Palm-Forster met with farmers in northwest Ohio to test different incentives that would promote the use of best management practices (BMPs) to help curb the excess phosphorus runoff from their fields.

Palm-Forster, assistant professor in the Department of Applied Economics and Statistics in UD’s College of Agriculture and Natural Resources, collected the data for the study in 2013 while she was a doctoral student at Michigan State University. Palm-Forster and her co-authors–Scott Swinton, professor, and Robert Shupp, associate professor both at Michigan State University–travelled to four different locations and spoke with 49 farmers, looking specifically at farms that could have an impact on Lake Erie, which was hit earlier this year with an algal bloom that stretched over 700 miles.

The researchers used four different incentives for their study–a cash payment, a cash payment with BMP insurance, a tax credit and a certification price premium–by the cost per pound of phosphorus runoff reduction to see which incentives the farmers most preferred.

“For this study, we used an artificial reverse auction, meaning that farmers didn’t have to go back to their farm and actually do any of these practices,” said Palm-Forster. “We were trying to pilot test these incentives in a controlled environment, so although it was artificial, they actually were receiving real cash payments based on how they performed during the session.”

“We learned a couple interesting things,” said Palm-Forster. “First of all, there didn’t seem to be a lot of differences between the bids for a cash payment or a tax credit which is interesting because it means we might have some flexibility in how we design programs. If there were the ability to create a tax credit that would be comparable, then we may be able to motivate this kind of management change through that mechanism instead of giving cash payments.”

Another surprising result was that the farmers asked for more money for the incentive where they were given a cash payment plus insurance.

“You would expect them to bid less because you’re giving them this insurance for free, so you would expect that they would request less cash in order to adopt a practice but they were very skeptical about how insurance would work in this particular setting,” Palm-Forster said. “We learned in focus groups afterward that they assumed that there were going to be more transaction costs–time, effort, money being spent trying to comply with program rules and just maintain eligibility–and they didn’t view that as being attractive at all.”

Farmers also seemed willing to accept the certification price premium as long as it would be comparable to an equivalent amount of cash payment. Palm-Forster said that the issue there is that if it happened in real life, it wouldn’t be targeted towards only environmentally vulnerable areas.

“If you imagine there’s this certification price premium, and any farmer who is willing to do these practices could be eligible for the premium, that means a farmer that’s on a piece of land that’s not as sensitive in an environmental sense would be getting the same price premium as a farmer that was on a really environmentally vulnerable piece of land, which is not going to result in the most cost-effective use of those dollars,” Palm-Forster said.

One of the most important aspects of this research according to Palm-Forster was that the researchers went out in the world and interacted with actual farmers to hear their preferences.

“Talking to the real decision makers is key,” Palm-Forster said. “It can be difficult to get farmers to engage with you but it’s really important and we learned so much from working with them in that setting. After we did the experiments, we had focus group discussions which let us understand why they were making these decisions in the experiment. This particular paper was enriched by having that understanding of where the farmers were coming from, which was facilitated by the focus groups.”

While this study focused on Lake Erie, it can be applicable to other areas of the country such as the Chesapeake Bay and the Mississippi River Basin.

These sorts of economic experiments are important as policy makers need to get as much information as possible from actual farmers to hopefully one day roll out incentive programs that the majority of farmers prefer.

“You want to do all these things before you try to roll out this type of program because you need to learn what would work and what wouldn’t,” Palm-Forster said. “This would be one piece of all of that ground work. There are a lot of projects right now in the western basin, a lot of researchers are thinking about this problem, and a lot of farmers are engaging in regional programs to help improve the lake but it’s still just not enough.”

–University of Delaware
via EurekAlert!

Tips for a bacteria-free Thanksgiving