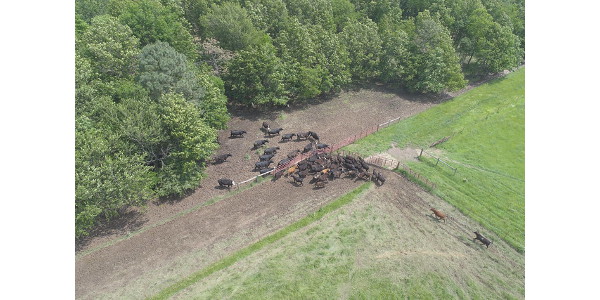 Fenceline method of weaning. (Pictures were taken with a drone by station superintendent David Cope)

MT. VERNON, Mo. — The most stressful time in the life of a beef calf is at weaning when they are five to seven months of age according to Eldon Cole, field specialist in livestock for University of Missouri Extension.

“Weaning stress can bring about sickness along with reduced gains that impact their postweaning performance. Stress may even occur in the owner’s life with the bawling of the cows and calves,” said Cole.

A variety of practices are used to reduce stress.

Cole says he remembers one tactic that was introduced by Oklahoma State in the 1960s. The design involved a lane with a board fence on one side. Cows were placed on one side and calves on the other. The lower board or boards on the fence were removable.

“When they began the weaning process the lower boards were adjusted so the calves could reach through and nurse their dams,” said Cole. “I don’t recall how long the calves reached through the opening to nurse, but when weaning day came, the researchers simply closed the opening in the fence. OSU researchers claimed there was no bawling or stress reaction, and that was my introduction to fenceline weaning.”

Since that time, the modern version of fenceline weaning has developed using various types of fencing, including power fencing. Calves remain in their home pasture where they are used to the forage, water supply and any supplementation. The cows are placed in the adjacent pasture where the calves can see, smell and hear their mothers.

Some cow-calf owners have adopted nose flaps with good results. The device is placed on the calves’ nostrils several days before the pairs are separated. It prevents the calf from actually nursing and it is removed when the cows and calves are split apart.

Fall calvers often leave the calves on the cows a month or so longer. In that management system, some cows will “kick off” their calves in a natural weaning process without flaps or fences.

“Regardless of the weaning method try to reduce stress and hopefully improve your calves’ health and profitability, it’s just good management. It is also consistent with the Beef Quality Assurance program promoted by the beef community,” said Cole.