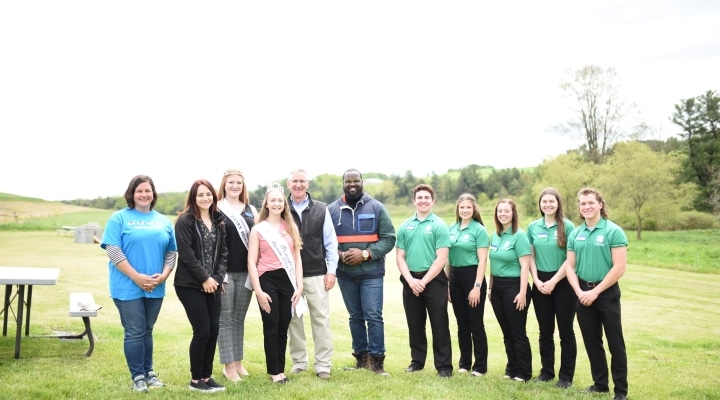 “In partnership with Vale Wood Farms, this Farm City Day allows school students to be more aware of food and where it comes from. As we grow the next generation of agriculturalists, we are better prepared and connected to address some of the greatest challenges of our time,” said Secretary Redding. “We have been very intentional in efforts to get the next generations interested in agriculture careers, including the process of how ice-cream is made.”

Event included a “From Moo to You” farm tour of the dairy barn and production facility. Students rotated through hands-on stations to learn what a cow eats, and how she makes milk. This tour teaches visitors where milk comes from and was followed by an ice-cream making activity.

The Wolf Administration, in coordination with the General Assembly, created a 15-member Commission for Agriculture Education Excellence, a joint commission between the departments of agriculture and education that is helping to develop a statewide plan for agricultural education, examining ways to get more agriculture education in schools both urban and rural. The commission has been charged with developing a statewide plan for agricultural education and coordinating the implementation of related programming. There is a place in agriculture for everyone, and we need to ensure students, teachers and consumers are supported when exploring opportunities in agriculture.

Pennsylvania ranks seventh nationally in total milk production, with nearly 520,000 cows producing more than 10.6 billion pounds of milk annually. The industry supports 53,300 jobs and contributes $14.1 billion to the state’s economy. In recent years, dairy has faced market challenges due to increased costs and changes in supply and demand. Recognizing these challenges, Governor Wolf has invested more than $50 million since 2015 to better position Pennsylvania’s dairy industry for the future.

Pennsylvania’s $132.5 billion agriculture industry fuels more than 593,000 jobs across the commonwealth, paying nearly $33 billion in wages each year. Over the next decade, agriculture is expected to face a workforce as farmers and laborers retire and new technology-based positions become available.

Vale Wood Farms received a farm vitality grant to help enhance the long-term health and vitality of Pennsylvania’s farms through sound business planning, efficient transitions of farm ownership, strategic farm expansion, diversification of agricultural production, and financial and technical expertise. The Farm Vitality Grant Program, run by the Center and Bureau of Farmland Preservation, has provided nearly $1.5 million in direct grants to farmers for business and transition planning services. The Wolf Administration has awarded 210 grants with 88 of those grants awarded to preserved farm owners.

Secretary Redding will tour the state as Farm City Days expand to provide students with hands-on learning opportunities and showcase farms and gardens that are making a difference in ag education and workforce initiatives. Historically, the department hosted the event at the Farm Show Complex.

Learn more about initiatives and investments to grow, protect and sustain Pennsylvania’s agriculture industry at agriculture.pa.gov.