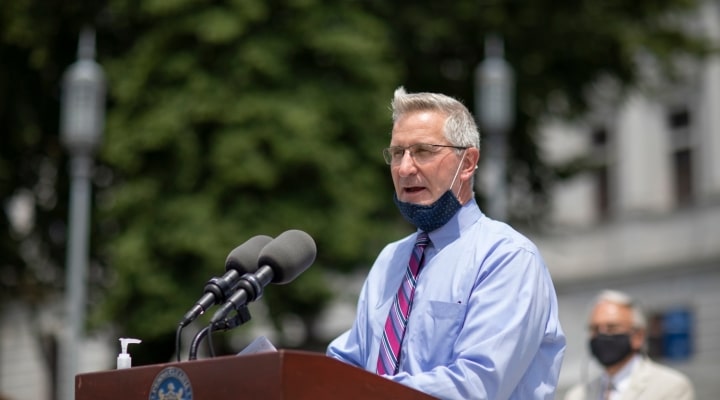 “If we’ve learned nothing else during the pandemic, it is the perils of allowing infectious disease to spread unchecked,” said Redding. “Pennsylvania’s nearly 3,000 licensed kennels require vigilant oversight to ensure that families don’t bring home a devastating disease when they bring home a new puppy. PA laws set a high standard to provide that oversight, but laws are worthless without the funding and personnel to enforce them.”

As a direct result of the legislature’s failure to act on a dog license fee increase, the bureau is unable to fill mission-critical dog warden vacancies and keep up with even minimum inspection requirements. This means dogs in kennels go unmonitored longer and are at risk for inadequate veterinary care, increasing chances that contagious and infectious diseases will go undetected.

ACCT Philly, a non-profit shelter that has held the animal care and control contract with the City of Philadelphia since 2011, houses and re-homes the city’s strays, taking in more than 18,000 homeless animals per year. Over the first decade of their contract, inadequate city funding, deteriorating conditions, overcrowding and an increasingly risky environment for disease spread culminated in massive disease outbreak and numerous dog deaths in 2019.

“The Bureau of Dog Law Enforcement was an essential partner in ACCT Philly’s journey to correct significant housing and husbandry issues over several years,” said Velazquez. “The bureau remains a strong partner in continuing to improve the quality of sheltering provided to Philadelphia’s animals.”

Resolving the complex issues at the shelter and bringing the physical conditions in line with high state standards took increased frequency of inspections, additional documentation, and bringing pressure on the organization’s leadership to prioritize improvements. The work resulted in a new roof, sealed floors, isolation space for sick dogs, vastly improved conditions in the shelter. In 2020, for the first time in years, the shelter met stringent state standards.

“This level of response to crisis conditions is not possible in the current funding environment,” Redding said. “We are risking not only catastrophic disease outbreaks, but a return to the conditions we saw before the Dog Law was amended in 2008.”

“Dog wardens are one of the first lines of defense in protecting Pennsylvania from infectious and contagious diseases of dogs,” said Dr. Ward. “Many of the diseases we monitor kennels for are zoonotic, meaning they can be transmitted from dogs to people.  Sadly, for some of these diseases there is no cure.”

Brucella canis, a bacterial infection sometimes seen in breeding kennels, can lead to infertility or late-term abortions of puppies. Dogs can spread brucellosis to humans with devasting results. Brucellosis, giardia intestinal infections and other diseases that can spread to humans, as well as parvovirus, kennel cough and diseases that are highly contagious among puppies, are discovered and kept at bay when dogs and kennels have adequate oversight by veterinarians and dog wardens.

In 2008, amendments to the Pennsylvania dog law gave Pennsylvania the strictest kennel standards in the nation for large commercial breeding kennels. Dog wardens ensure that kennel owners are being held accountable for maintaining adequate living conditions for the dogs and puppies and protection from the spread of disease. As small businesses, kennel operators rely on quality inspections and reports to show consumers their kennel is a good place to buy a puppy or adopt a dog.

Headlines about dogs being seized for poor health and horrific living conditions result from illegal kennel operations uncovered by dog wardens following up on tips. State dog wardens have access to enter kennels without a search warrant and are key to shutting down unlicensed or unsafe operations and working with criminal law enforcement and humane society police to stop animal cruelty.

For several years the Department of Agriculture has pushed for a minimal dog license fee increase to keep the Bureau of Dog Law Enforcement funded to continue their work to crack down on illegal kennels, register and track dangerous dogs, and ensure the health and well-being of dogs across the commonwealth, but the legislature has not heeded that warning.

With the bureau experiencing a funding shortage, taxpayer dollars are being redirected to the bureau to keep the minimum mandated services up and running. Governor Tom Wolf’s proposed budget includes a supplemental transfer of $1.2 million for 2020-21 in addition to a transfer for 2021-22 of $1.5 million. These funds are coming from all taxpayers, rather than a small fee that is a built-in responsibility of dog ownership.

The bills propose an increased license fee for most dog owners from $6.50 to $10 annually. They also require puppies to be licensed at eight weeks — the age they are legally allowed to be sold — a shift from the current standard of 12 weeks. This is expected to increase license sales by raising dog-owner awareness of their responsibility to buy a license.