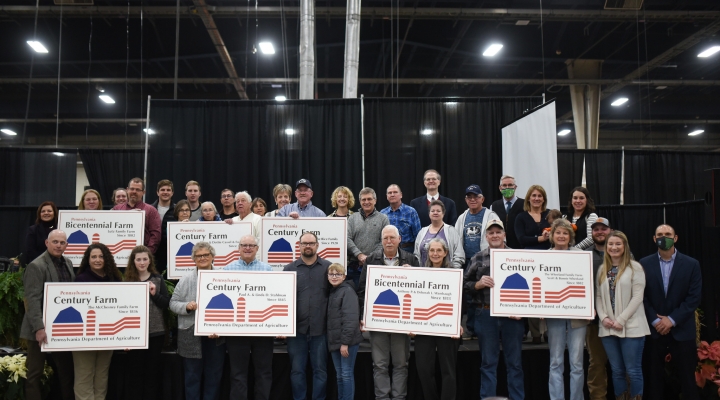 Redding recognized the farms – which have been in operation for a combined total of more than 1,350 years – through the Pennsylvania Department of Agriculture’s Century and Bicentennial Farm Program. The program helps promote the strength and durability of Pennsylvania’s farm families and recognizes families who have been farming the same land for 100 years and 200 years, respectively.

Since the Century Farm program’s inception in 1977 and the creation of the Bicentennial Farm program in 2004, the Pennsylvania Department of Agriculture has recognized more than 2,280 Century and Bicentennial Farms. The program was established to help publicize the strengths and durability of our farm families.

“The 106th Pennsylvania Farm Show exemplifies the best of Pennsylvania agriculture and showcases the people who have dedicated generations to grow the industry and the family farm,” said Secretary Redding. “Centennial and bicentennial farms embody what it means to be Harvesting More – more conservation, more stewardship, more community and more preserved land for future generations. These farms will tell the story of Pennsylvania agriculture for centuries to come.”

The following farms were honored during the awards ceremony:

The Anthony and Deborah Wambaugh Farm in Buffalo Mills, Bedford County, was originally purchased by Anthony’s great, great, great grandfather, John Lafferty with his brother William on March 26, 1813. Two hundred years later, on September 25, 2013, Anthony and his wife Deborah took over ownership of the family farm. John Lafferty was a farmer, while William made tombstones using stones from the quarry on the farm. The original house and barn burnt in 1891. The present house and barn were rebuilt in 1891 on the original foundations. The existing summer kitchen and smokehouse were built around the same time and are still in use today. Around 1937 a stone spring house was built and is still in use. The Mowry children, grandfather and his siblings to Anthony carved their names and the year 1909 in the barn.  A Mowry family reunion was held during the time, and the event still continues on the farm to this day. All 194 acres from the original tract are in use today. The farm produces alpaca products. Bedford County is home to 29 century and 6 bicentennial farms.

The Lorena Rice Farm in Perry County was purchased in 1920 by Lorena’s grandfather, David Thomas. In 1954, Lorena and her husband, Frank Rice, purchased the original 135-acre tract and additional 45 acres, 180-acres total, from her uncle. The house in use on the farm today was built in 1855, and the original stone barn built in 1833 remains operational. Today, the Rice Farm produces grain and cattle. It was preserved in 2010. Perry County is home to 32 century and five bicentennial farms.

The Robert F. Pardoe, Jr. Farm – Century Farm
Frank E. Pardoe, Northumberland County, purchased 93 acres in 1918 for $100, where he and his wife farmed with their five children. Using his contracting and carpenter skills, Frank renovated the original house, barn and shed, which are still operational today. Their son, Robert Pardoe, Sr., purchased the farm in 1951. Today, Robert F. Pardoe, Jr. lives on the farm and crops 380 acres. Northumberland County is home to four bicentennial and 36 century farms.

The Cleon S. and Dorothy M. Cassel Farm, Dauphin County, was originally purchased for $4,496 in 1903 by John Swope, great grandfather to Cleon Cassel. The original farm consisted of 100 acres. Today, it has grown to 115 acres and is used for horse breeding and wine production. John Swope sold the farm to his son-in-law Christian Cassel in 1920. In 1970, upon his passing, Christian deeded the farm to his son R. Earl Cassel, and then in 1995, Cleon Cassel received half of the farm upon his father’s passing. Cleon and Dorothy’s children oversee the farm’s daily operations and intend to keep the farm viable for future generations. Dauphin County is home to 13 century farms and four bicentennial farms.

The M.W. Smith Farms located in Newport, Perry County, was originally purchased in 1890 by Fredrick W. Knuth, great, great grandfather of Kristie Lawler. Today the farm is a working dairy farm. Kristie, along with her husband Michael live on the farm full-time. The entire family works together to keep the dairy going strong. Some of the original buildings are still standing and/or in use today. Perry County is home to 32 century and 5 bicentennial farms.

The Scott and Bonnie Wheeland Farm located in Cogan Station, Lycoming County, was originally purchased by Scott’s great, great uncle, George Harmon, along with his wife Margaret Wheeland Harmon in 1882. In 1903, Scott’s great grandparents, Harrison D. Wheeland and Ellen Harmon Wheeland purchased the farm from George and Margaret. An interesting note is that George Harmon and Ellen Harmon Wheeland were brother and sister, and Margaret Wheeland Harmon and Harrison D. Wheeland were also brother and sister. So, the farm’s history can be traced back for both the Wheeland and Harmon families. In 1924, Scott’s grandparents Harrison and Margaret Wheeland purchased the farm from their parents for $5,000, and then in 1982, Scott’s parents, Dale and Connie took possession of the farm. Harrison and Margaret would sell the produce that they grew, along with eggs and baked goods each Saturday at the Williamsport Growers Market. The family also produced homemade butter to be sold. Scott and Bonnie purchased the farm in 1994. Today they are still farming, along with their daughter, Megan. The plan is for Megan and her family to be the next generation to live on and run the family farm. The original farm consisted of 134 acres. Today, 87.33 of those original acres are still in use. The family currently grows corn, hay, soybeans and wheat and have a beef cattle operation. Lycoming County is home to 70 century farms and 1 bicentennial farm.

The McChesney family farm of Blairsville, Westmoreland County, was originally purchased by Clint McChesney’s great, great, great grandfather Andrew McChesney. The original tract consisted of 89.89 acres. Over the years the farm has been both a dairy and a beef operation.  The family also raised hogs, sheep, goats, draft horses, poultry and bees. The family has used canine helpers to herd their cattle over the years.  Border Collies, Airedales and Welsh Terriers have been their favorite companion animal work dogs to use.  Currently they are using mixed breeds and an English Shepherd to herd the cattle. The family did not use a tractor on the farm until at least 1942.  That is the earliest date that Leonard McChesney, Clint’s father can remember adding a tractor to the draft team when working in the fields. An original two-room stone house still stands on the property. Clint’s parents, Leonard and Esther bought the farm with Clint and his wife Amy on May 14, 2008. Today the farm consists of 109.58 acres that is pastureland and a beef operation. Westmoreland County is home to 33 century farms and 10 bicentennial farms.

To be eligible for the Century Farm Program, a farm must be owned by the same family for at least 100 consecutive years. A family member must live on the farm on a permanent basis, and the farm must include at least 10 acres of the original holding or gross more than $1,000 annually from the sale of farm products. The Bicentennial Farm Program follows the same guidelines but requires 200 consecutive years of ownership. Farm history is filed in the archives of the Pennsylvania State Historical and Museum Commission.