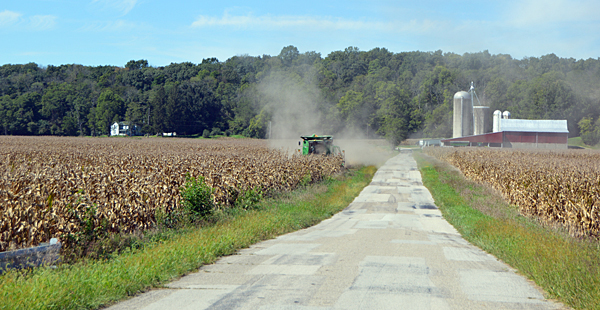 Next month, farmers and other agricultural growers and producers across the country will begin receiving their 2017 Census of Agriculture questionnaires and Secretary Russell Redding urged every farmer and grower in the state to step up and be counted to ensure Pennsylvania is well represented and able to inform future public policy. (Wikimedia Commons)

HARRISBURG, Pa. — Next month, farmers and other agricultural growers and producers across the country will begin receiving their 2017 Census of Agriculture questionnaires and Secretary Russell Redding urged every farmer and grower in the state to step up and be counted to ensure Pennsylvania is well represented and able to inform future public policy.

Every five years, the National Agricultural Statistics Service, which is part of the U.S. Department of Agriculture, conducts a nationwide count of those who earn at least $1,000 per year growing food and other crops. The data is then used to inform food and agriculture policies and programs for the entire country, including funding decisions.

“During the next few weeks, farmers and ranchers will receive a copy of the agriculture census in the mail and we urge them to make time to complete and return the form before the deadline,” said Secretary Redding. “Agriculture one of Pennsylvania’s leading industries with a proud history from the earliest days of the commonwealth. We’re national leaders on so many different agricultural commodities, practices and markets, but to ensure we can leverage our leadership position in this industry, our producers must stand up and be counted in the census. The best way for farmers to help to shape farm policies and future decisions that could affect their livelihoods and their communities is to participate in the census.”

Census questionnaires will be mailed to farmers, ranchers and growers next month. The 2017 census form, which requires an estimated 50 minutes to complete, must be returned by Feb. 5, 2018, but respondents are encouraged to respond online at www.agcensus.usda.gov. The Web-based questionnaire allows access from any electronic device and farmers can return to their draft responses as their schedules allow. The new online form saves time and improves convenience for respondents, while capturing a more detailed account of U.S. farming and ranching.

Several new questions have been added to the 2017 census, including the number of farmers who are military veterans or who are actively serving in the U.S. Armed Forces, Reserves or National Guard.

“Two percent of Americans feed us and 2 percent of Americans protect us. The new census question on military service will help USDA to quantify how many of these heroes have helped put food on our tables and who have helped us sleep soundly and securely at night,” said Redding. “Those who have served in the military have developed many of the same skills needed to succeed in farming — exceptional planning capabilities, an incomparable work ethic and a commitment to serving the greater good.”

Other new questions for the 2017 census explore food marketing practices, comparing direct sales to consumers versus sales through retailers, specifically for edible farm products. NASS is legally required to keep all information confidential.

The Agriculture Census defines a farm in broad terms: “Even small plots of land — whether rural or urban — growing fruit, vegetables or some food animals count if $1,000 or more of such products were raised and sold, or normally would have been sold, during the Census year.”

Uses for the census data also run the gamut, including federal, state and local governments, agribusinesses, trade associations and other groups who serve farmers and ranchers. Farmers themselves can use data from the census to evaluate opportunities and risks for their own operations.

NASS notes other uses for the data, including:

For specific examples of how the census data from previous years has been used, visit Your Census. Your Story.

How to fund conservation plans